The estate wine from Aveleda is classic, dry Vinho Verde. Light, crisp, and packed with great white and green fruit, it has lively, fine, perfumed acidity.  While many folks think that Vinho Verde is a summertime quaff; I love its brightness and ability to not only complement seafood and many lighter foods, but its bright mouthwatering acidity cuts through the taste of overwhelming fatty foods like a lightsaber through butter.

The fruitiness of this wine is immediately attractive. It is balanced by the lightly mineral acidity and the fresh texture and acidity. The wine is packed with tangy fruit

80% Loureiro and 20% Alvarinho from Vinho Verde, Portugal.  The floral notes of the Loureiro are merged to perfection with the fruit of the Alvarinho. The result is a complex, elegant wine with a long, persistent after-taste. Delicate, with filigreed lemon-lime flavors offering fruit depth before signing off in a crisp, clean finish.

The eastern French region of the Savoie is one of the most exciting wine regions on the planet, and it's near the top of my must-see places to go once we can get on airplanes and visit other countries again.   Savoie is blessed —a cool mountain climate on a warming planet, and about as idyllic a place to grow and make wine as one could ask for.

Known more for skiing and other outdoor pursuits, the Savoie is not so well known as a wine-producing area, though within the area known as the Combe de Savoie, there are a handful of the best producers.

With little-known grape varieties such as Jacquère, Mondeuse, and Altesse nestling alongside Pinot Noir, Chardonnay and Gamay, the world of Savoie wines begs to be explored. I was astonished at the quality of Jean Vullien’s wines, especially when compared to most other producers in the area. How were they producing such high-quality, clean and fresh wines when so many others clearly couldn’t? It transpired that Jean Vullien learned viticulture in his native Bordeaux and his two sons, David and Olivier graduated from the renowned wine college, La Viti in Beaune.

The domain’s holdings include all of the region’s indigenous grape varieties, as well as strategically-placed parcels of Chardonnay and Pinot Noir. The wines range from a crisp, lemon and mineral Jacquère-based white that British wine author Andrew Jefford would categorize as “Muscadet of the Alps” to complex floral and spiced reds made from Mondeuse. In recent years, David and Olivier have also earned a reputation for their excellent Méthode Traditionelle sparkling wines.

Though the Vulliens have been making wine for 40 years, the family is perhaps best known as a leader in another segment of the wine industry. Since 1890, Vullien Pépinière Viticole (vine nursery) has been supplying young vines to growers throughout France. In fact, they were the source for about 25% of the Chardonnay planted in Chablis after the ravages of phylloxera.

Jacquère is a variety of white grape found primarily in the Savoy wine region of France.[1] It is a high-yielding vine variety which is used to produce lightly scented, refreshing and gently aromatic dry white wine, such as Vin de Savoie. Jacquère is the grape used in Apremont wines and is the usual wine paired with cheese fondue (a dish from the same region).Vullien's 100% Jacquère is grown on soils of dark Jurassic limestone and black marl with a pebbly topsoil layer of scree. The wine is fermented in stainless steel tanks and the malolactic fermentation is blocked. The resultant wine is light, mineral and brightly acidic with notes of alpine flowers and citrus. Enjoy as an apéritif or with fondue or mountain cheeses. 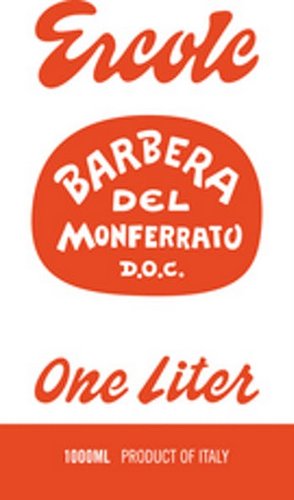 Weston Hoard spent four years living in Piedmont and working for renowned winemaker Paolo Scavino. When he returned to the United States in 2011, he determined to channel his experience in Italy into a new importing project which he named “The Piedmont Guy.” The company “does Piedmont,” and only Piedmont.

Ercole is a project aimed at honoring the work of the unsung heroes of Italy — the grape growers themselves. Ercole, whose English translation is Hercules, is only made possible by a generations-old cooperative of local growers in the Monferrato area. Every fall, these men and women cultivate bright and balanced fruit, allowing us to make real wines that are transmitters of time and place. The place, Monferrato, ranks among the most historic grape-growing areas of Piedmont.  The fruit from this overlooked area gives us Ercole, a family of wines offering remarkable value. Enjoy these one-liter, screw-top bottlings unconditionally. Salute!

This Barbera offers fresh aromas and flavors of raspberries, blueberries, and cherries. Unlike other regions of Piedmont, Monferrato still offers quality Barbera at a profound value. The origin of Barbera likely dates back to the 7th century, and many believe the hills of Monferrato to be the grape’s original birthplace. Monferrato Barbera yields vibrant aromatics, bright red fruits, and finesse. 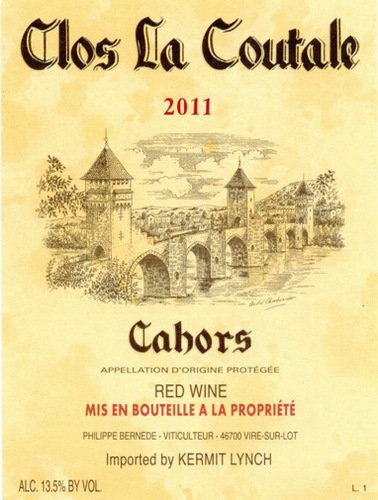 Deep in the southwest of France, amidst dramatic rock formations and cliffs, the Lot River slowly snakes its way along the valley floor, coiling covetously around the charming town of Cahors. The diversity in architecture serves as a proud historical mark left by many previous generations of inhabitants.

Once a former Roman town, Cahors was also as a center of commerce during the Middle Ages that served as an important crossroads for pilgrims on the trail to Santiago de Compostella. Among the many specialties that have brought pride to the region, the constant has been its wine.

A.O.C. Cahors is known as the “black wine” of the Southwest—the deeply inky, earthy wines that seem to complement the regional fare of duck (and duck fat!) so wonderfully. Cahors is also the birthplace of Cot, the grape more commonly known as Malbec.

The Bernède family is an intricate part of this tradition, watching over one of the region’s oldest domains that was founded before the French Revolution.

Today, Cahors’ jack-of-all-trades and Renaissance man, Philippe Bernède, continues the family tradition with both heart and ingenuity. Philippe’s vines rest upon the gentle slopes that rise up from the Lot River. He farms 150 acres of land along the alluvial terraces of the Lot Valley that are rich in siliceous, clay, and limestone soils. The microclimate of the vineyards is ideal, with southwest sun exposure and topographic protection against the frost.

Over the years, Philippe has tinkered with the house blend to achieve a greater equilibrium. Today, the blend consists of 80% Malbec and 20% Merlot, creating an intense wine that juggles elegant rusticity with everyday drinkability. Coutale has quite a record of age-worthiness as well and Philippe is not afraid to pull out older vintages of his wines alongside much more expensive Bordeaux. They stand up pretty well!  Philippe’s genius is not only evidenced by his wines - he is also the proud inventor of a successful line of double-hinged corkscrews that stands to change your future bottle-opening experiences!

The vines have an average age of 25 years and are grown organically without the use of chemical fertilizer or pesticides.  According to tradition, the grapes are picked off from the stalks. The vineyard is divided into a number of parcels, in order to produce a number of carefully selected wines. Each plot is vinified separately with a long maceration. Fermentation is carried out in thermo-controlled vats, and, as befits a wine for laying down, the fermenting process takes place at a temperature of 80°F over a period of 15-18 days. 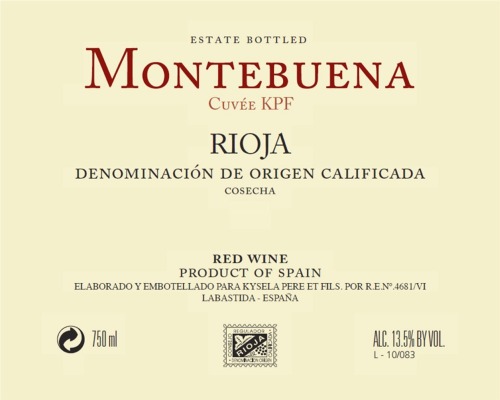 Montebuena – which means ‘good mountain’ – is the name of one of the best quality areas of the ancient winemaking village of Labastida in Rioja. It is located in the eastern part of the village and covers more than 395 acres.

Labastida’s viticultural records go back several centuries, but the best evidence of its winemaking history is its “lagares rupestres” – man-made formations, carved into large rocks in the vineyards, consisting of three holes where the grapes were pressed to obtain the juice prior to fermentation. These were used between the 9th & 18th centuries.

Montebuena is 100% Tempranillo from 20-25-year-old vines. The winery uses precise viticultural techniques and advanced technology to track the vegetative cycle: they developed a system of weather stations to monitor the vineyards’ health, thus preventing destructive diseases.

Montebuena displays a brilliant deep ruby red color. Aromas of juicy fruit combine with a spicy vanilla bouquet. Smooth and fruity in the mouth, with some well-integrated secondary nuances. Full-flavored with a persistent, pleasant finish. 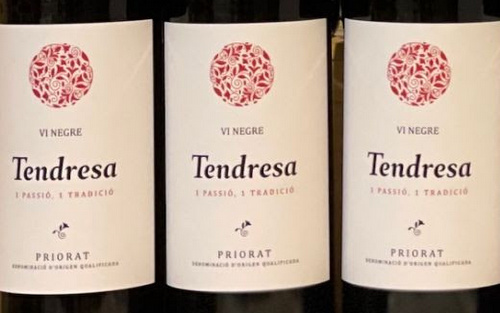 Tendresa is a custom Priorat project from a favored importer.

Priorat is a Denominació d'Origen Qualificada (DOQ) for Catalan wines produced in the Priorat county, in the province of Tarragona, in the southwest of Catalonia. The DOQ covers 11 municipalities. It primarily produces powerful red wines, which came to international attention in the 1990s. The area is characterized by its unique terroir of black slate and quartz soil known as llicorella.

It is one of only two wine regions in Spain to qualify as DOCa, the highest qualification level for a wine region according to Spanish wine regulations, alongside Rioja DOCa. Priorat is the Catalan word, the one that appears most often on wine labels, while the Castilian equivalent is Priorato.  The traditional grapes in the region are Carignan and Grenache, but some New World varietals are allowed (Merlot, Cabernet and Syrah).

Early on, winemaking cooperatives dominated. Much of the development of Priorat wines to top class is credited to Carles Pastrana, René Barbier and Álvaro Palacios. Winemaker Barbier, then active at a winery in Rioja owned by the Palacios family, bought his first land for Priorat vineyards in 1979, convinced of the region's potential. At this stage, there were 600 hectares (1,500 acres) of Priorat vineyards. In the 1980s, he convinced others, including Palacios, to follow suit and plant new vineyards in suitable locations, all named Clos. For the first three vintages, 1989–1991, the group of five wineries pooled their grapes, shared a winery in Gratallops, and made one wine sold under five labels: Clos Mogador (Barbier), Clos Dofi (Palacios, later renamed to Finca Dofi), Clos Erasmus, Clos Martinet and Clos de l'Obac. From 1992, these wines were made separately. In 1993, Palacios produced a wine called L'Ermita sourced from very old Priorat vines, which led to an increased interest in using the region's existing vineyards to produce wines in a new style.

These wines are very different from traditional Priorat, and Tendresa is an attempt to rediscover old school Priorat, using traditional grapes, aged in tank, used oak, and amphorae.   This is a balanced, food-friendly style of wine.  This wine comes from organically farmed, old, traditionally terraced vines that sit atop crumbly slate