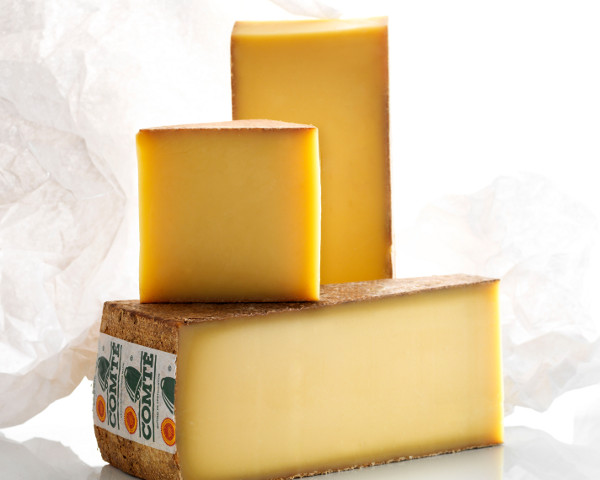 Considered one of the world's greatest cheeses Comté captures the essence of raw, mountain pasture-fed cow milk. Its full name is Gruyère de Comté, which should give you some indication of its flavor profile.

Comté is a French cheese produced in the Jura Massif region of Eastern France. The unpasteurised cow's milk used is mainly from Montbeliarde Cattle or French Simmental (or cross-breeds of the two). This hard mountain cheese is matured to perfection in the silence and darkness of special caves where the cheese gets its unique taste, texture and color. There are several maturing cellars in the region where Comté is ripened for a minimum of 4 months to 18 or 24 months. Comté is only made when the cows are outside grazing in the lush Alpine pastures; when it's cooler and the cows aren't on pasture, their milk is used for the fabulous Vacherin Mont d'Or.

The cheeses are made by the farmer, who then transfers the 90 lb rounds to a ripening cellar, or frutière. Each frutière has a slightly different recipe for aging the cheese to perfection, so in essence, each wheel of Comté tastes different (hundreds of farmers, dozens of aging rooms, different breeds, different times of year for the milk, etc., etc.)

With flavors of fresh butter, citrus, hazelnuts, caramelized onions or chocolate, Comté is s a smooth, firm, butter-colored cheese that darkens at the rind. Most Comte found in the United States is 8 to 12 months old.

Some say Comte's flavor resembles Gruyère's. It does a little, which is no surprise given its history. Gruyère formerly was used as a catchall term to describe Rhone-Alpine-style cheese in the western French and eastern Swiss mountains until 2001. Family members included Comte, Beaufort, Abondance, French Gruyere and Swiss Gruyere. Made in the somewhat similar fashion typical of these mountains, the wheels are large cooked and pressed cow's raw milk cheeses.

Try melted in a fondue, in a grilled cheese sandwich, as part of a cheese plate or with a piece of fruit. I'm sure you'll agree, Comté is one of the world's great cheeses!