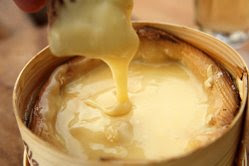 Served at room temperature or warmed up in a slow oven, Vacherin is a great party cheese and goes well with crisp white, light red, and sparkling wines.

Vacherin Mont d'Or is a seasonal cheese, only available in the winter months, made from the milk of mountain cows who have been brought down from their pastures for the season.

It's related to other mountain cheeses such as Emmentaler, Comte and Gruyère, but made in much smaller rounds and also treated differently, so that the cheese is almost liquid when fully ripe.

This unique artisan product has a deep woodsy smell and flavor, Vacherin has an almost liquid interior. It comes in a round pine box, with the cheese enclosed by a birch or spruce strip called a sangle, and a velvety reddish/brownish rind.

To eat the cheese, allow it to breathe at room temperature for several hours before carefully slicing off the rind and enjoying the soft cheese inside, or warm it up, v e r y   s l o w l y in a warm oven (150-175F); perfect for dipping into with pieces of bread or boiled small potatoes!!

Our version - called Petit Vaccarinus - is thermalized so that it passes FDA muster, but still delivers the wonderful stinky, oozy cheese you know and expect.

The Massif du Mont d'Or, rises to a height of almost 5000 feet above sea level. Over the years there has been a heated argument about who made the Vacherin first, the French or the Swiss. The Swiss have finally conceded that the French were the first.

The origins of Mont d' Or is hard to trace. But as early as the 13th century are records that cheeses were being made in this Haut Doubs and Vaud regions that were encircled in wood. At this time Monks were responsible for developing cheesemaking in many areas, and although there is no doubt that cheese was being made in The Alps before then - the monks were at the forefront of pioneering dairy farming and cheesemaking as we know it today. Clearing high pastures in the Alps, the monks created great swathes of land for high grazing in the Summer to produce rich milk.

It's related to other mountain cheeses such as Emmentaler, Gruyère, or Comté, but made in much smaller rounds and also treated differently, so that the cheese is almost liquid when fully ripe.

Traditionally made with the winter milk of the same cows that produce Gruyere and Comté in the summer, this cheese is only available from October until April, making it all the more precious. The cheese must be made from cows munching on straw and fodder; once outside to graze at pasture, their milk is used for larger alpine cheeses. Swiss regulations also dictate the cheese must be produced at elevations of 2,297 feet or higher.

The box and spruce band should never be removed, even when serving, as they enable the cheese to be contained.

Please note: Vacherin's rind naturally has a mottled mix of white, blue, and green cheese molds on its orange-y pink surface. They’re part of the natural aging process and help soften the interior paste to its custard-like perfection. Don't be alarmed by this washed-rind beauty's scent! Its funky essence is what makes this a special cheese experience.