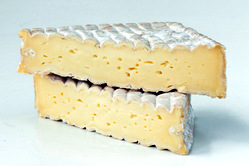 One of France's oldest cheeses, Pont-l'Eveque (pohn leh veck) takes its name from a village in Normandy, the region where the cheese originated centuries ago. Pont-l'Évêque is located between Deauville and Lisieux in the Calvados département of Normandy. It is probably the oldest Norman cheese still in production.  Historians believe that its early name was Angelot, a cheese mentioned in a 12th-century document as the dessert served at all the best tables.

Pont-l'Eveque is an AOC (appellation d'origine controlée, or name-controlled) cheese, so the methods used to make it are tightly defined.  Once out of its mold, the cheeses are turned manually every day. They are scrubbed on the seventh day, which gives the rind its distinctive amber color. The cheeses are subsequently transferred to a cellar for one to four weeks to develop their full flavor as they ripen. Its rind is mostly white, with some buff to reddish coloration. The interior is soft to semi-soft and supple, with a few small eyes and a uniform butter color. Depending on the age and condition of the cheese, the aroma can be robust.