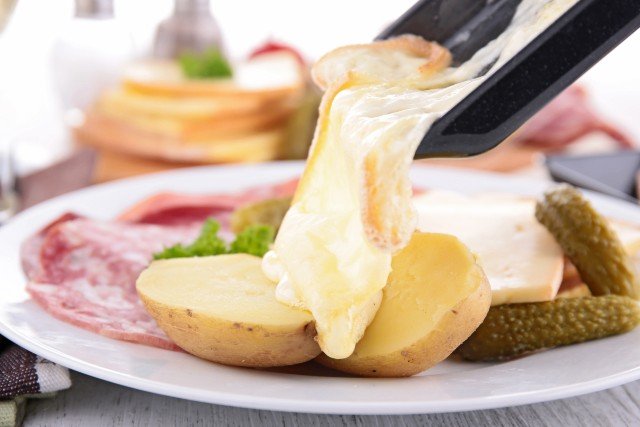 Raclette is both a cheese and a communal meal involving the cheese.

Raclette the cheese is a semi-hard cheese made on both sides of the French and Swiss Alps. Valais Raclette or Fromage a Raclette, as they are traditionally called, are made using ancestral methods with unpasteurized milk of cows grazing on the alpine meadows. The name Raclette comes from the French word ‘racler’, which means ‘to scrape’.

The cheese has got a thin, brownish-orange colored rind and a pale yellow pate with a few scattered open holes. It has a very distinctive pleasant, aromatic smell with a creamy texture, which does not separate even when melted. The flavor can vary from nutty, and slightly acidic to milky.

While Switzerland supplies 80% of Raclettes, French Raclettes are slightly softer with a smooth and creamy flavor.

When the days are shorter and there's a chill in the air, there's nothing better than Raclette!

Mmmmelty, melty, melty cheese, roasted potatoes, pickled vegetables, and cured meats are all comfort foods in my book, and having them all combined in a meal that's shared with family or friends only makes it taste better.

Raclette is a communal Swiss melted cheese meal with a history that goes back to at least Medieval times, originating with hunters, farmers and shepherds who prepared their repast around an open fire.  Raclette was mentioned in medieval texts from Swiss convents dating from as early as 1291. The cheese was originally consumed by peasants in the mountainous Alpine regions of the cantons of Valais and Fribourg (Switzerland), and Savoie and Haute Savoie (France).

It was then known in the German-speaking part of Switzerland as Bratchäs, or "roasted cheese". Traditionally, cow herders carried cheese with them when they were moving cows to or from pastures up in the mountains. In the evening, the cheese would be placed next to campfires  for softening, then scraped onto bread.

Raclette is often still served as it was centuries ago; rich, melted cheese combined with potatoes, sausage, cured meats and other vegetables for a warming and hearty dish.

Though different variations of the dish have emerged throughout the years--and cooking methods have been updated--the distinctive flavor of Raclette has remained remarkably and deliciously unchanged through time.

We always have a good supply of Raclette on hand!  Allow for about 1/3 to 1/2 pound per person.

Here's a link to a foolproof recipe!