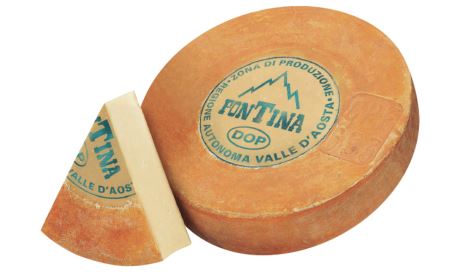 Fontina Val d'Aosta is a classic Italian cheese that's been made in the Aosta Valley (north western Italy) since the 12th century.

This is the real Fontina, made from the raw milk of cows grazing in 6,500 foot high Alpine pastures. The uniquely rich and nutty flavor is reminiscent of truffles, with a subtle fruity, grassy aroma and supple texture. There are many Fontina cheeses made with alternative names such as "Fontinella", "Fontal", and "Fontella" but the Italian Fontina, Fontina Val d'Aosta, identified by a Consorzio (Consortium) stamp is the original and most famous. The other versions are much milder than the original Fontina. There is also a Danish version which can be recognized by the red wax rind.

The Italian Alps, the highest mountains in Europe, lie in the northwest corner of Italy, near the French and Swiss borders. They are terraced by the steep-sided pastures of Valle d'Aosta, over which towers Mont Blanc. In spite of the very dry summers, these high-altitude pastures provide a wonderful variety of lush, unique grasses upon which graze the cows whose milk gives us Fontina. Genuine Fontina is made only in Valle d'Aosta. It’s an ideal gustatory expression of this territory's inimitable character, its history, its hard-working people, and their love for the mountains.

During the summer the cheese is made at the chalets in the alpine pastures, and in the winter months it’s made in creameries lower down in the valley. Only fresh, raw (unpasteurized) milk from a single milking of Valdostana cows is used to make Fontina. The cheese is made twice every day, and aged for a minimum of three months in natural environments. Each cheesemaker has his own favorite location for ripening his cheeses: caves, grottos, tunnels, even former military bunkers. One cooperative dairy uses an old copper mine. Exotic, earthy, and enchanting, Fontina is perhaps one of the best Italian flavor experiences around.

It’s made in large, 17- to 22-pound wheels, about 4 inches thick, and 18 inches in diameter. Its flavor is due in part to the incredible richly flavored milk it is made from, a natural result of cows feeding on the wide range of grasses and plants on the hillsides of the Italian Alps: flora untouched by chemicals.

Fontina is 45% fat and has a thin, creamy brown to terracotta rind that is lightly oiled and uneven. The cheese is smooth and buttery, almost spreadable, when young. It’s milky, and you can detect the smell of the alpine meadows. It has a pale straw color and a few small holes fairly evenly distributed throughout. As the cheese matures, it becomes darker and much drier. The older cheese develops an earthly but fruity aroma and a mellow flavor that’s both nutty and fruity. Authentic Fontina Valle d'Aosta has a mark on it that you can’t miss. Stenciled in purple on one side of the cheese is a large circle with a mountain in the center of it with the word “Fontina” printed across the mountain. Look also for the name of the local cooperative stenciled on the rind of each authentic Fontina cheese.

Fontina is a wonderful cheese for cooking and is a great table or dessert cheese. It melts into a creamy mass that works well for sauces. Fonduta, the Piedmontese version of fondue, uses Fontina instead of the Swiss Gruyere and also cream, butter, eggs, and wild mushrooms. (Fontina can also be substituted for Swiss Raclette.)

Italian Fontina has a natural rind that turns tan to orange-brown with aging.

The texture and flavor of Fontina depends on how long it has been aged. The texture can vary from semi-soft to firm and the flavors from mild and rich to more robust and near overpowering.

Usually, fontina is aged for 90 days. The interior of fontina is pale cream in color and riddled with holes known as "eyes". With a fat content of 45%, the cheese is very rich and creamy which gets nuttier with aging. This versatile cheese can be used to make fondues, and similar Italian dishes.