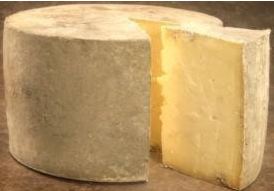 It is quite rare for an English-style farmhouse cheddar like this to be produced in the U.S.

The Fiscalini family dairy was originally established by John Baptiste Fiscalini in 1914, just outside of Modesto, CA. After nearly a century of dairying, the family diversified the operation and expanded into cheesemaking. They began making their first cheese in 2001 after hiring master cheddar maker, Mariano Gonzales, to direct the development of an English-style bandage-wrapped cheddar.
Fiscalini Bandage-Wrapped Cheddar is made with the milk of Holstein cows from the family's herd. Within eight hours of milking, the fresh, sweet milk is coagulated and turned into curds. The curds are then cut and stacked using the traditional "cheddaring" process (one of only about a dozen creameries that actually "cheddar" their cheddar). After the wheels are molded, they are wrapped in cheesecloth and rubbed with lard to protect the cheese as it ages for a minimum of 18 months.
This award-winning cheddar - "Best Farmhouse Cheese" at the 2002 American Cheese Society Awards and World's Best Cheddar at the World Cheese Awards in London three times- has a dense, almost chewy texture. It has a sharp savoriness of smoky meat and roasted peanuts with a pleasant whisper of tropical fruit.
Rich, buttery and oh so sharp, Fiscalini Farmstead Cheddar is truly a world-class cheese, and a wonderful example of the success of the artisan cheese movement in the USA.   Even James Montgomery-maker of England's Montgomery Cheddar, calls it the "best American Cheddar."  Fiscalini has a firm, crumbly, straw-colored paste; a nutty, smoky and earthy taste, a bit more round than most domestically aged cheddars.
Bandage refers to a traditional aging method where the rind is wrapped - bandaged - in linen to ensure consistent flavor development across the entire wheel. The results can be spectacular:  each bite hits you with three or four different tastes simultaneously and complementarily.   There's a dry sharpness of a well-aged Cheddar, rounded by buttery texture, topped off by a clean milky finish!
Category: Cheese Library