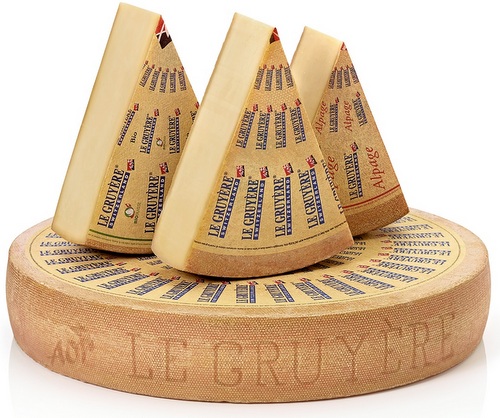 Gruyère (pronounced GREE yare) is an AOP raw milk Swiss cow's milk cheese with a great nutty flavor.  Produced in large, 70-80 pound wheels, this cooked curd and pressed cheese is just the ticket for grilled ham and cheese sandwiches, fondue, gratins, omelets, with fruit, or as part of a cheese plate.

Named for the town of Gruyères in Switzerland where it was originally made, Gruyère is a firm cheese with a pale yellow color and a rich, creamy, slightly nutty taste. It features a few small holes, or "eyes", characteristic of Swiss cheese, which are formed by gas bubbles released by the bacteria that are used in making the cheese. Gruyère has fewer eyes, and smaller ones, compared with other varieties of Swiss cheese.

Gruyère originated in the Swiss cantons of Fribourg, Vaud, Neuchâtel, Jura, and Berne. Before 2001, when Gruyère gained the appellation d'origine contrôlée status , some controversy existed whether French cheeses of a similar nature could also be labelled Gruyère (French Gruyère style cheeses include Comté and Beaufort).

A palate of vast complexity, that opens with full-bodied, fruity tones, the flavors slowly journey towards earthy and nutty with a soft finale to finish. Covered by a natural rind, the texture of the body is dense during its youth, becoming flaky and somewhat granular as it ages.

AOP rules require that the alpine cows roam freely on pastures cushioned between freshwater streams and hillsides in the Fribourg Prealps. This natural forage is key to imparting the signature flavors of the Gruyere, making it impossible to replicate fully in other regions.  (In the wintertime, when the cows are eating silage, the same cows produce milk for another amazing cheese - Vacherin Mont d'Or.