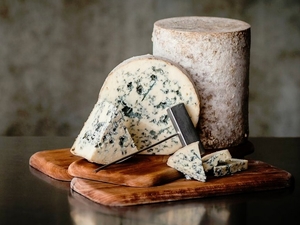 Jasper Hill Farms' Bayley Hazen Blue,  made from their Farmstead, high-quality whole raw milk. It is named for an old military road commissioned by George Washington during the Revolutionary War. Though no major battle ever took place, the road brought Greensboro its first settlers and continues to be used today.

Bayley has developed a loyal following because of its fudge-like texture, toasted-nut sweetness, and anise spice character. The paste is dense and creamy, with well-distributed blue veins. The usual peppery character of blue cheese is subdued, giving way to the grassy, nutty flavors in the milk. Named World's Best Unpasteurized Cheese at the 2014 World Cheese Awards!

Bayley Hazen Blue is a buttery, natural-rinded cow's milk blue cheese, made primarily with morning milk, which tends to be lower in fat. Production takes place every other day. Mateo Kehler, managing member at Jasper Hill, developed the recipe by starting with a Devon Blue recipe from England, changing its shape, and aging it between two and three months to end up with a stable rind that will hold up under typical retail conditions.

Bayley Hazen's texture is firm and slightly drier than many blues. Its interior paste is cream colored and punctuated by blue-green pockets and veins. Located in the rolling countryside of Greensboro, Vermont; Jasper Hill Farm was bought by brothers Andy and Mateo Kehler in 1998. When the farm came into their possession, it was extremely run-down, but by 2003, Andy and Mateo had acquired their first 15 Ayrshire heifers. Ayrshire milk is particularly well-suited to cheesemaking, due to mid-range fat and protein content.

The way the fats and proteins break down are a perfect platform for the development of an excellent cheese. The herd grazes from late spring to early fall and over successive years, the grazing land at Jasper Hill has been improved by planting a wide variety of clovers, grasses, and legumes that enhance the flavor of the milk. Thanks to careful management and a focus on building good genetics, the herd is now among the highest milking quality in the United States. In addition to the farm and cheesemaking, the brothers have also developed another arm of the business, The Cellars at Jasper Hill. The Cellars, cheese maturing caves comprised of 22,000 square feet, were designed and built not only to house Jasper Hill's cheeses, but also to mature the cheeses of several Vermont-based producers. Jasper Hill's own range of cheeses includes Alpha Tolman, Constant Bliss, Harbison, Moses Sleeper, and Winnimere. Tasting Notes Flavors are complex and multi-layered. The typical tang of the blue mold, Penicillium Roqueforti, takes a back seat to a wide array of flavors that include butter, chocolate, and occasionally licorice.