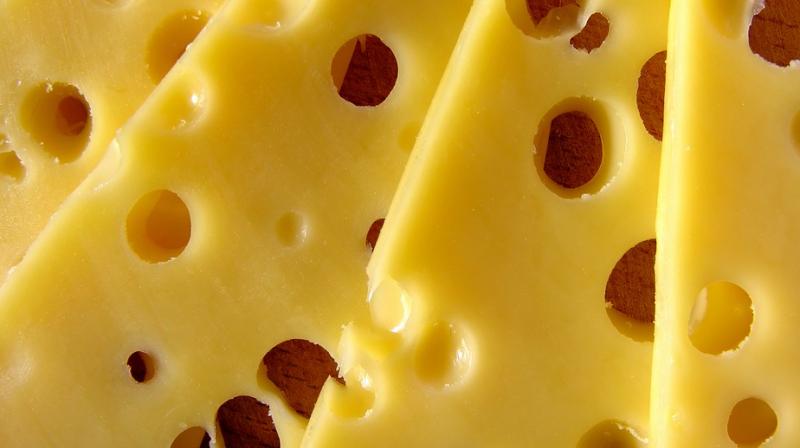 Emmentaler is a raw cow's milk cheese from Switzerland that has large holes in the paste.
While the denomination "Emmentaler Switzerland" is protected, "Emmentaler" alone is not; so similar cheeses of other origins, especially from France, are called Emmenthaler.  Many folks call this type of cheese "Swiss Cheese, " and while it is a Swiss cheese, calling it by that name only adds to confusion among the hundreds of other cheeses from Switzerland that are imported into the USA.
Emmentaler is a very large cheese, with whole wheels ranging in size up to 220 pounds!
There are many theories as to why Emmentaler rounds are so large - the one that makes the most sense is that back in the day, the cheese was taxed by the wheel rather than by its weight. Long ago, this mountainous country had a lot of peaks and rivers that needed bridges to cross. And every bridge had a toll you had to pay. They couldn’t just weigh the entire wagon as they do with trucks today.  So instead the toll collector calculated your fee by the number of items in your cart. Ten wheels of cheese would result in your being charged per item. So cheesemakers made just one cheese that was the same weight as 10 smaller cheeses.  Et voila, your transport costs dropped almost 90%!
The cheese takes its name from the Emme River Valley where it originated circa 1293. This pale yellow cheese is made from part-skim, unpasteurized cow's milk and has a mild, slightly nutty, buttery, almost fruity flavor. The holes range from small to large walnut-sized.  This cheese is produced in the central cantons of Switzerland. It's hard, thin rind is covered by paper with producer's name on it.
The aroma is sweet with tones of fresh-cut hay. The flavor is very fruity, not without a tone of acidity. It is considered to be one of the most difficult cheeses to be produced because of its complicated hole-forming fermentation process. The cheese tastes delicious with a glass of white wine.
Three types of bacteria are used in the production of Emmental: S. thermophilus, Lactob. helveticus, and Propionib. freudenreichii. Historically, Emmental's trademark holes were a sign of imperfection, and until modern times, cheese makers would try to avoid them.
Emmental cheese is used in a variety of dishes, particularly in gratins, sandwiches, salads, and fondue.
Category: Cheese Library
Emmenthal, Emmentaler