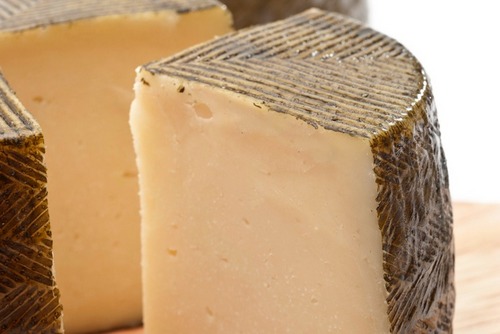 Manchego (officially Queso Manchego), is a cheese made in the La Mancha region of Spain from the milk of Manchega sheep. (Manchego means from La Mancha in much the same way that Oaklander means from Oakland, or Alamedan means from Alameda) .

Manchego cheese is to be aged for between 60 days and two years. We have two versions: three-four months and nine-twelve months.

Since 1984, Manchego Cheese has been classified as a Denominación de Origen (DO) cheese in Spain. It is also a Protected Designation of Origin (PDO) cheese in the European Union. Some of the requirements for these classifications include that Manchego must be produced in the La Mancha region of Spain, be made from the whole milk of Manchega sheep, be cave-aged between 30 days and two years, and be produced in a specifically sized cylindrical mold with a signature thatched rind.

Manchego is a hard, buttery cheese with a satiny texture that is often served with Membrillo, a quince preserve that pairs perfectly with this, the most popular cheese from Spain. It has a distinctive creamy flavor of sheep's milk that lingers pleasantly on the palate. Manchego Cheese is white to straw in color with a thin, inedible, artificial rind. Tiny pores lace the interior, adding to the granular texture as it ages. As the consistency hardens, the flavors deepen, becoming more rounded and toasty in their nuances.

The cheese has a distinctive flavor, well-developed but not too strong, creamy with a slight piquancy, and leaves an aftertaste that is characteristic of sheep's milk.  Pair with Tempranillo, some Membrillo, some olives, and you're good to go.