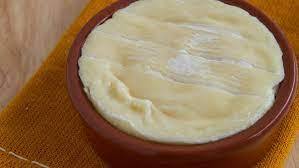 Saint-Marcellin is a soft French cheese made from pasteurized cow's milk. Named after the small town of Saint-Marcellin in the Isère, it is produced in the Rhônes-Alps region of France.

Produced in the Rhône-Alpes region of France, St. Marcellin is a delicate little cheese that requires protection from the world—so much so that it arrives at your home in a tiny terra cotta crock, sheltered from the bumps and bruises of commercial life. And for good reason, too. The rind of this cheese is almost non-existent at room temperature, and once warmed, even the gentlest prod of a cracker causes it to burst forth a fountain of sensuously unctuous cream. While St. Marcellin is satiny-smooth upon first taste, its personality is more complex than its feather-like texture might first let on.

The first traces of Saint Marcellin cheese go back to the 15th century. At the time, it was exclusively made from goat’s milk. Louis XI is said to have discovered it during a convalescence near Vercors after having a hunting accident there; during his stay, lumberjacks were said to have shared this local cheese with him.

The king would later introduce Saint Marcellin to the royal table. Beginning in the 18th century, goat breeding gradually lessened and cow breeding increased, and Saint Marcellin became a mixed-milk cheese before becoming what it is today, a cow’s milk cheese.

It is generally small in size, weighing in around three ounces, and presented in a reusable ceramic crock.   It has a mottled creamy-white exterior, a mushroomy rind,  and the cheese's runniness increases with age.

It's perfect as a stand-alone appetizer with crackers or crudités, or as part of a cheese course. It pairs perfectly with Chenin Blanc, Sauvignon Blanc, Sparkling wines, Rosés, or lighter reds.