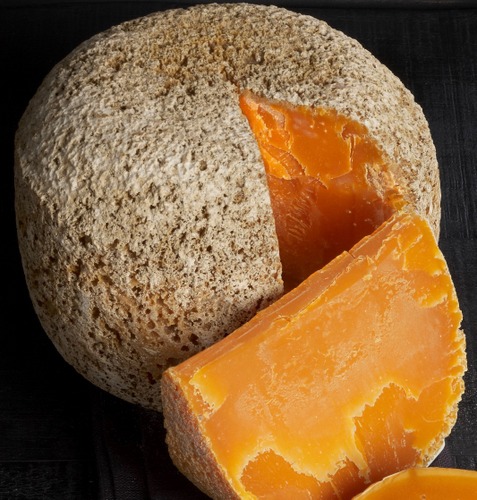 Mimolette (MEEM-oh-LET) is an aged, raw cow's milk cheese traditionally produced around the city of Lille, France. This hardy cheese couldn't be more different from its close neighbor Camembert.

Looking like a cratered, dusty cannonball, Mimolette is infamously difficult to open for its super-hard, craggy countenance. Inspired by Dutch Edam, it has since gone in a unique direction; the appearance and floral aroma of the rind is the work of tiny mites, specially evolved to cheese. The French call them tiny affineurs for their important role in the aging process. Its electric-orange paste has sweet, caramelized depth and a smooth, fudgy finish.

In France, it is also known as Boule de Lille after its city of origin or Vieux Hollande for being made after the tradition of Edam cheese.   It was originally made at the request of Louis XIV, who was looking for a native French product to replace the then very popular Edam.

To make it distinct from Edam it was seasoned with annatto seed to give it a sweet and nutty flavor and a distinct orange color.   It normally weighs between four and five pounds and is made from cow's milk.

Its name comes from the French word molle, meaning "soft". This refers to the softness of the crust when young – with age it becomes harder.  It has a grey crust and orange paste; the orange color comes from the annatto. The cheese has a similar appearance to a cantaloupe melon.

In 2013, the Food and Drug Administration detained about a ton of the cheese, putting further imports to the United States on hold. This was because the cheese mites could cause an allergic reaction if consumed in large quantities. The FDA stated that the cheese was above the standard of six mites per cubic inch.  Today, cheeses for export to the USA are vacuumed off to keep the cheese mite count below this standard.

Mimolette can be consumed at different stages of aging. When younger, its taste resembles that of Parmesan. Flavors are of bacon, caramel, butterscotch and toasted nuts, with an underlying sweetness that is not cloying.