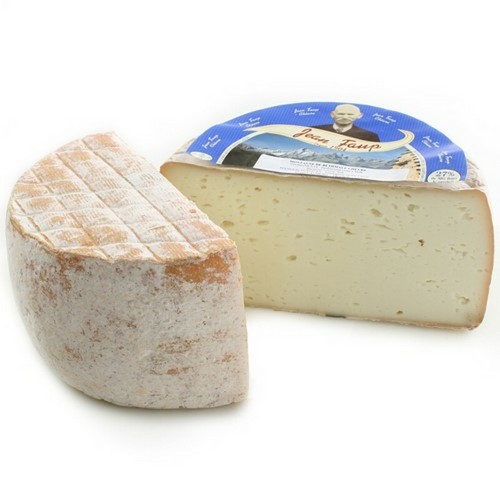 In 1904, Jean Faup started producing Camembert in the village of Oust in the Pyrénées region of Southwestern France to export to the French colonies of northern Africa. For three generations the Faup family developed this business until the market suddenly died when the colonies gained their independence. In 1960 the dairy had to reinvent itself.

Jean Faup, the third, decided to resurrect the local cheese made traditionally by shepherds in their summertime mazucs – stone cheesemaking huts in the patois of the Upper Ariège – when they took their herds to graze at higher elevations. Jean modernized the recipe by pasteurizing the milk, painting the rind, and aging it only three weeks: the post-war Pyrénées cheese was born!

In 1977, Didier Lemasson, Jean’s nephew, took over the dairy and returned to a more traditional cheese, produced with raw milk and a natural, washed rind. His vision was to revitalize the local cheese known as Bethmale. Didier continued to innovate: in 1984, he developed a pressed-curd tomme made of mixed cow and goat milk. In 1988, he launched a pure goat milk pressed tome which reinstated goat milk production in the area.

A traditional uncooked pressed cheese from the Ariège area of the Pyrenees that is named after the valley where it originated, Bethmale is certainly the best-known of the Pyrenean cheeses.  The cheese can be made of cow’s, goat’s, or sheep's milk, or even of a blend of the three.  Ours is made from goat's milk  A rubbed, brushed, and lightly washed rind housing a chewy textured cheese pitted with tiny pea-sized holes.  Bethmale made from cows’ milk is rich and creamy; Bethmale made from goats’ milk has a lovely floral flavor, with sweet notes of hazelnut. Though it was rarely seen outside the region for many years, it is now available in the US.

Lovely earthy, floral flavors with nutty rustic additions to the taste.   Its naturally-forming rind is brushed and turned for two to three months to assist in its hardening.  Serve this popular French cheese with ham, olives, almonds, and rustic bread for the perfect picnic.  It has a chewy texture and an earthy, floral flavor with nutty undertones.

Serve this popular French cheese with ham, olives, almonds, and rustic bread for the perfect picnic

Bethmale is a fantastic cheese for a cheeseboard: it pairs easily with wines of the Languedoc and Sherry as well as many beers. The slightly pungent flavor pairs perfectly with sweet accompaniments like fig jam. Some even say that it was a favorite of Louis VI when he passed through the region in the 12th century.
Category: Cheese Library
bethmale