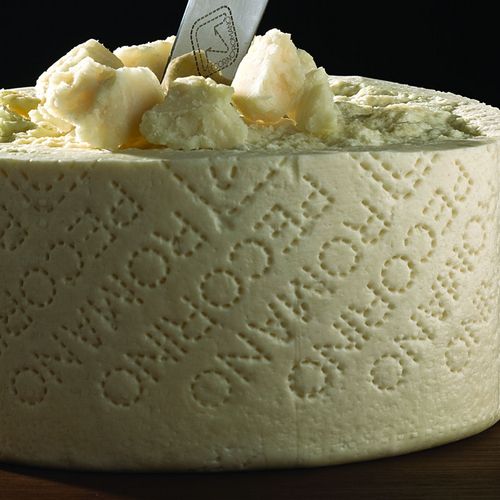 Pecorino Romano (Italian pronunciation: [pekoˈriːno roˈmaːno]) is a hard, salty Italian cheese, often used for grating, made out of sheep's milk (the Italian word pecora, from which the name derives, means sheep).

Although the name may suggest that it is a typical cheese from Rome, 97% of its production occurs in Sardinia.

Pecorino Romano was a staple in the diet of the legionaries of ancient Rome. Today, it is still made according to the original recipe and is one of Italy's oldest cheeses.

On the first of May, Roman families traditionally eat pecorino with fresh fava beans during a daily excursion in the Roman Campagna. It is mostly used in Central and Southern Italy.

Pecorino Romano cheese, whose method of production was first described by Latin authors such as Varro and Pliny the Elder about 2,000 years ago, was first created in the countryside around Rome. Its long-term storage capacity led to it be used for marching Roman legions' rations. A daily ration of 27 grams was established to be given to the legionaries, as a supplement to the bread and farro soup. This cheese gave back strength and vigor to tired soldiers, giving them a high-energy food that was easy to digest.

It was produced in Latium up to 1884 when, due to the prohibition issued by the city council of salting the cheese inside their shops in Rome, many producers moved to the island of Sardinia.  It is produced exclusively from the milk of sheep raised on the plains of Lazio and in Sardinia.

Pecorino Romano must be made with lamb rennet paste derived exclusively from animals raised in the same production area, and is therefore not vegetarian.  Pecorino Romano is most often used on pasta dishes, like the better-known Parmigiano Reggiano. Its distinctive aromatic, pleasantly sharp, very salty flavor means that in Italian cuisine, it is preferred for some pasta dishes with highly flavored sauces, especially those of Roman origin, such as bucatini all'amatriciana or spaghetti alla carbonara. The sharpness depends on the period of maturation, which varies from five months for a table cheese to eight months or longer for a grating cheese.

It should not be confused with pecorino Toscano (from Tuscany) or pecorino Sardo (from Sardinia). Unlike pecorino Romano, these cheeses (which are not particularly salty) are generally eaten by themselves or in sandwiches. Many stores in the United States sell "Romano cheese", which should not be confused for genuine pecorino Romano which is an Italian product recognized and protected by the laws of the European Community. Unlike the Italian cheese, American Romano is milder and uses cow's milk instead of sheep's milk.

Even today, the cheese is made using only traditional methods in the unique areas of origin. Dry-salted by hand, the wheels get a salting numerous times, to deliver a fabulous taste. Its lengthy aging time from eight to 12 months results in a dry and granular texture and a strong taste.

When young, the cheese has a soft and rubbery texture with a sweet and aromatic flavor. The flavor becomes sharper and smokier when aged for eight months or longer. Pecorino Romano is one of the most widely used, sharper alternatives to Parmesan cheeses. Because of the hard texture and sharp & salty flavor, Pecorino Romano is an excellent grating cheese over pasta dishes, bread, and baking casseroles. Although, the use of the cheese is limited because of its extreme saltiness.

Pair it with a glass of big, bold Italian red wine or a light beer.