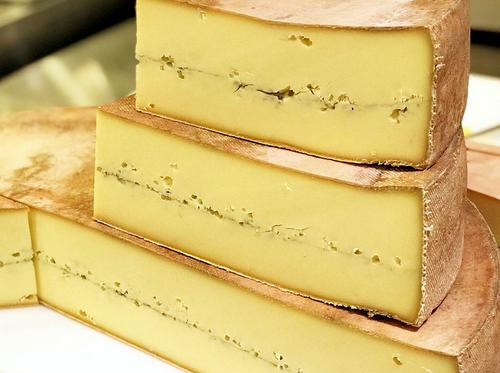 It was a cheese tragedy for both cheesemongers and cheese lovers when the FDA decided to ban the importation of Morbier cheese from France, simply because they couldn't regulate the type of vegetable ash that is essential to that cheese's production.   Made from charred vegetable matter, ash has been part of cheesemaking for centuries. It makes the surface of acidic young goat cheeses more basic so that a protective coat of mold can grow, and is used in many domestic cheeses (Humboldt Fog, for example).

Enterprising Euro cheesemakers have tried a workaround, using wine must and cocoa powder on ersatz Morbier, but the results aren't worth tasting.  Enter Ashcroft.

Ashbrook is supple and creamy in texture, and the flavor is fruity and funky with just a hint of vegetal sourness. In homage to Morbier, each wheel contains a line of vegetable ash (maritime pine ash) running through the center of the paste and is aged for three months by Spring Brook Farm.

Spring Brook Farm is an amazing creamery: set on over 1,000 acres in the lush green hills of Reading, Vermont. The property is home to over 100 registered Jersey cows, plus goats, chickens, roosters, pigs, and turkeys. Spring Brook is a farm with a mission; parent organization Farms for City Kids offers on-site agricultural education programs for urban youth. And thanks to its expanding product line of award-winning cheeses and partnerships with local dairies, the farm is a boon to the local economy, too.

Ashbrook is a raw milk, washed-rind cheese that is based loosely on French Morbier with a New England terroir twist.  In times past, Morbier production called for a two-step process. Curd from the evening milk went into the forms and was topped with ash to protect it. The next day’s morning milking yielded another batch of curds, which went on top. For Ashbrook, the wheel is halved horizontally as soon it can hold its shape and the ash is scattered between the halves. Then the wheel is pressed to consolidate it, and the two halves re-knit over the two to three months of maturation.

There are aromas of damp, dark cellar with a mild funkiness on the rind that gives way to a paste that is milky, lactic, and sweet.  It's a perfect complement to lighter red wines, crisp whites, non-funky beers and ales, and makes a superb semi-soft addition to a cheese plate.