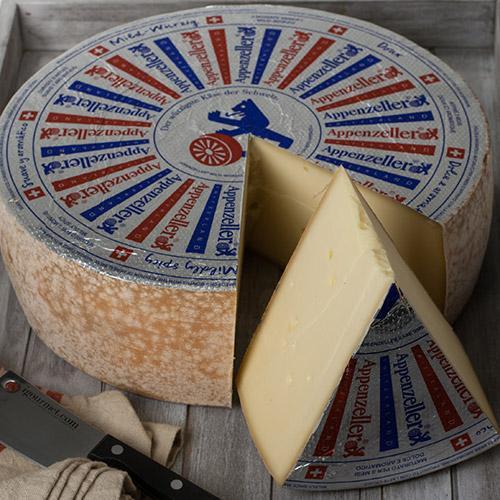 Produced near the town of Appenzell in northeastern Switzerland, Appenzeller is made from cow's milk and has a history dating back more than 700 years. Appenzeller is a wonderful example of traditional, Swiss mountain cheesemaking at its best.

Appenzeller cheese is so special because of the quality of the milk produced by the region’s legendary Brown Swiss cows. The animals’ Alpine diet consists of the freshest grasses, herbs, and flowers, which creates enticing, highly-seasoned flavors in the milk they produce, thus passing the flavor along to the cheese. Like many other cheesemaking regions of Switzerland, cows in Appenzellerland are moved to higher elevations during the summer months in order to graze on the new spring growth.

Visitors to the region can still see the spectacle of herdsmen dressed in traditional costumes, and cows sporting flower crowns and wreaths, as they parade up the mountains after the winter snows have melted, and back down in the autumn before the first snow of the season. You can almost see the swagger of the lead cows (chosen for their age or milk-producing prowess) as they saunter up the mountain, proudly wearing the largest cowbells as a sign of their elevated rank. With cows this loved, it’s no wonder the milk they produce is among the highest quality in the world.

As with many Swiss mountain cheeses, once the curd is formed and cut, it is then reheated to a higher temperature to expel more whey from the solids, forming smaller pieces of curd in the process. The curd is then pressed while still in the vat, submerged under the whey before being transferred to molds for further pressing. After unmolding, wheels are moved to the maturing rooms where they are aged for 4-12 months.

One of the distinctive steps in the maturing process of Appenzeller is that the young cheeses are regularly washed in a special solution of white wine, herbs, spices and occasionally herb brandy. This contributes greatly to the development of the rind and the flavor of the cheese.

The texture of Appenzeller is firm, supple, and very smooth, dotted with occasional holes or "eyes." The interior paste is ivory-white in color. Tasting Notes Flavors are incredibly robust, rich and complex, including herbaceous, savory notes of flowers and grasses, accompanied by a rich, mineral tang. The sweetness of the milk provides a balance to all this, but the finish on the palate is long and memorable.

It is one of the best cheeses to add to fondue, with my recipe containing up to one-third of the tangy cheese.  It's perfect on a cheese plate, in a grilled cheese sammy, with a crisp apple or other tree fruit, or by itself with a glass of white wine.