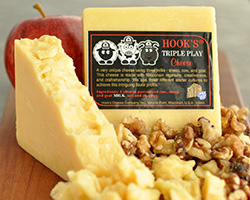 While Hook’s Cheese Co. has its own herd of dairy cows, Tony & Julie Hook have sourced milk from neighboring goat and sheep farms to create Triple Play Extra Innings. A little bit alpine, a little bit gouda, a little bit Havarti, this cheese has been aged for 12 months, giving it a dense texture with crunchy flecks of salt throughout. Sweet and nutty like a gouda, it also has an aroma of caramel and warm milk.

Firm and pale gold with faint cooked milk and caramel aromas, the cheese breaks into Cheddar-like nuggets but has no Cheddar tang. It is sweet like a Gouda, nutty like an alpine cheese and creamy like a young Cheddar—a mellow, snackable cheese to serve with cocktails or on a cheese board with red wine.

Nearly 40 years ago, a pair of college sweethearts decided to make a living making cheese. Today, that same couple, Tony and Julie Hook, are still going strong, crafting more than 50 cheese varieties, including a stunning line-up of award-winning blues and aged Cheddars at their Hook’s Cheese factory in Mineral Point, Wis. Renown to locals and tourists alike as the super enthusiastic duo who samples and slings cheese under the “Hook’s Cheese” tent every Saturday at the Dane County Farmer’s Market, the Hooks have developed a first-class model for making award-winning cheese by buying fresh milk from the same group of small, local dairy farmers for the past three decades. “The farmers know what kind of milk we want, and we pay them a good price for it,” says Tony Hook. “It’s a system that’s worked for 35 years.” It’s also a system that provides the basis for consistent, high-quality cheese. The Hooks know this well, as they started that system back in 1977. That was the year they were hired as cheesemakers at Buck Grove, a factory dating back to 1887, which was rebuilt after a fire consumed the original building in 1925. At Buck Grove, they made mostly Cheddar and Monterey Jack, but it was a 1982 Colby that put the pair on the map.

Janet Fletcher:  "The Hooks make several dozen different cheeses at their Mineral Point, Wisconsin, creamery. They like mixing things up. For Triple Play, they use three different starter cultures, which I’m guessing are Swiss, Cheddar and Gouda cultures. Certainly, Triple Play exhibits characteristics of all three, and Tony acknowledges using a mixed-bag of techniques. The curd isn’t handled like Cheddar, but it is washed to remove lactose, a common Gouda technique."