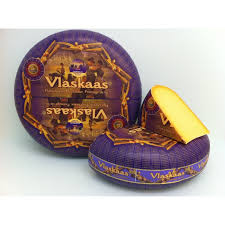 This pasteurized cow milk cheese is richer than Gouda, delivering bold flavors and great meltability.    Try it in a cheese plate with fruit, sliced in a sandwich, or melted (grilled cheese sammy or as the filling in an omelet).

The recipe for this cheese from Flanders dates back many centuries. Its name means Flax Cheese, owing not to an ingredient but to the plant that dominates the local countryside. In the Middle Ages it was quite popular and always served at the annual oogstfeest (Flemish harvest festival, where flax was harvested, used in making linen).

During the harvest celebration, the traditional meal was slijtepap, fresh multigrain bread with thick slices of Vlaskaas.

Similar to Gouda but richer, creamier and deeper yellow in color, Vlaskaas' purple rind distinguishes it from other cheeses.

In a spectacular North Sea bog-draining engineering feat, 400 years ago, the Beemster Polder was the first large-scale land reclamation project in the Netherlands.  Sitting 20 feet below sea level, the pasturelands on this 200 square mile area in North Holland are famous for having a unique nutrient and mineral enriched soil that produces incredibly fertile, lush grass.  As a result, the milk from happy Beemster cows that graze freely on the polder has a distinctively buttery texture and especially sweet flavor.