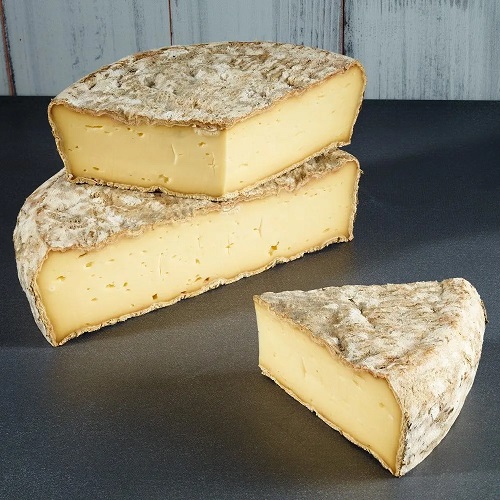 Tomme is a type of cheese that comes from various villages nestled in the French and Swiss Alps that are named after the village or rergion  of origin, with the most famous coming from the Savoie/Savoy in the French Alps.

Most tommes are made from raw, cow’s milk after the cream has been skimmed off to make butter. As a result, the cheese has a relatively low fat content (between 20 and 45%).

Throughout the year the cheese's flavor varies depending on whether the cows that provide the milk are eating winter hay or fresh summer grass.

After the wheels are formed, they are matured in caves for around two to four months. While maturing the cheese starts to develop a thick grey rind reminiscent of velvet and mottled with patches of yellow or red mold.

Its paste varies from off-white to a buttery yellow. Expect some tangy, slightly citrus notes with some mushroomy notes all underscored by notes of damp forest floor.

Plays well with other cheeses, making it an excellent addition to a cheese board or your next mac n' cheese masterpiece.