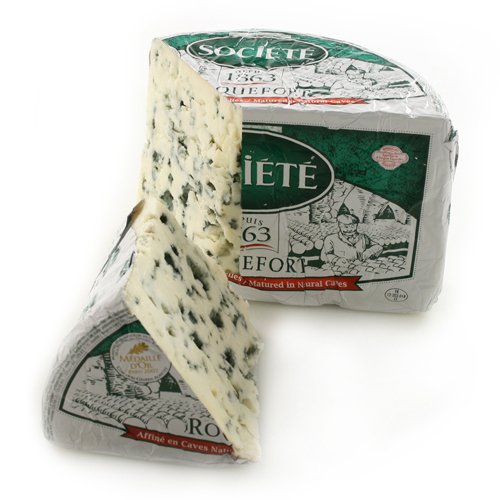 Roquefort is a sheep's milk blue cheese from the south of France, and (along with Bleu d'Auvergne, Stilton, and Gorgonzola) is one of the world's best-known blue cheeses.

Though similar cheeses are produced elsewhere, EU law dictates that only those cheeses aged in the natural Combalou caves of Roquefort-sur-Soulzon may bear the name Roquefort, as it is a recognized geographical indication, or has a protected designation of origin.

The cheese is white, tangy, crumbly, and slightly moist, with distinctive veins of blue mold. The blue veins provide a sharp tang. It has no rind; the exterior is edible and slightly salty. A typical wheel of Roquefort weighs about five and a half pounds. Each wheel of finished cheese requires about three gallons of milk to produce.

Roquefort is known in France as the king of cheeses.

Legend has it that the cheese was discovered when a youth, eating his lunch of bread and ewes' milk cheese, saw a beautiful girl in the distance. Abandoning his meal in a nearby cave, he ran to meet her. When he returned a few months later, the mold (Penicillium roqueforti) had transformed his plain cheese into Roquefort.

In 1411, Charles VI granted a monopoly for the ripening of the cheese to the people of Roquefort-sur-Soulzon as they had been doing for centuries.  In 1925, the cheese was the recipient of France's first Appellation d'Origine Contrôlée when regulations controlling its production and naming were first defined. In 1961, in a landmark ruling that removed imitation, the Tribunal de Grande Instance at Millau decreed that, although the method for the manufacture of the cheese could be followed across the south of France, only those cheeses whose ripening occurred in the natural caves of Mont Combalou in Roquefort-sur-Soulzon were permitted to bear the name Roquefort.

The mold that gives Roquefort its distinctive character (Penicillium roqueforti) is found in the soil of the local caves. Traditionally, the cheesemakers extracted it by leaving bread in the caves for six to eight weeks until it was consumed by the mold. The interior of the bread was then dried to produce a powder. In modern times, the mold can be grown in a laboratory, which allows for greater consistency. The mold may either be added to the curd or introduced as an aerosol through holes poked in the rind. Roquefort is made entirely from the milk of the Lacaune breed of sheep.

As of 2009, there are seven Roquefort producers. The largest by far is Roquefort Société made by the Société des Caves de Roquefort, which holds several caves and opens its facilities to tourists, and accounts for around 60% of all production. Roquefort Papillon is also a well-known brand. The five other producers, each holding only one cave, are Carles, Gabriel Coulet, Fromageries occitanes, Vernières and Le Vieux Berger.  The first four are exported to the US.