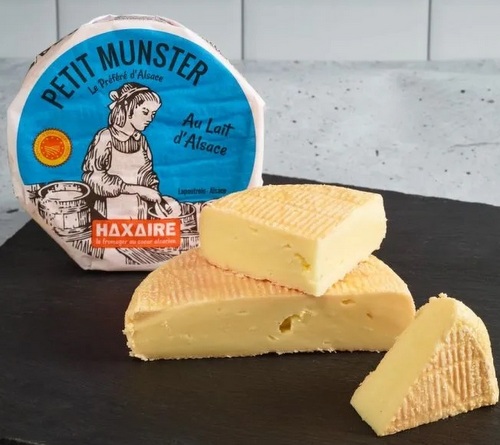 Please do not confuse Munster cheese - a washed rind cheese from France -  with Muenster, those little rubbery slices you find in delis.   Munster is a strong-smelling soft cheese with a subtle taste, made mainly from milk first produced in the Vosges, between the Alsace-Lorraine and Franche-Comté regions in France. Famous for its pungent smell and sticky orange rind, the interior is a fine, soft and smooth consistency, with a meaty and slightly sweet flavor.    Perfect as an appetizer, in a cheese course, or with stone fruit.  Pair with an aromatic white wine (Alsatian Gewurz, Riesling, etc), amber or dark beers, or ciders.

Munster is virtually the only regional cheese native to Alsace. It has a very pronounced, powerful aroma that is oddly reminiscent of fried eggs. Munster is smelly due to its washed rind. Cheeses such as Munster, Livarot, Pont L'Eveque, Taleggio, and Limburger are referred to as washed-rind cheeses. They are rubbed by hand with a cloth moistened by a brine solution of rock salt and water. This solution encourages the growth of the bacteria that give these cheeses their characteristically strong flavors and smells, while inhibiting the growth of mold. These cheeses have "red" rinds, which are actually closer to orange in color. Many cheese connoisseurs relish these cheeses, but they are certainly not for the timid. Their depth of flavor and character are difficult to match, and once you develop a taste for them they will surely rank among your favorites.

The name "Munster" is derived from the Alsace town of Munster, where, among Vosgian abbeys and monasteries, the cheese was conserved and matured in monks' cellars. This cheese originated in the Admodiation, an area on the top of the Vosgian mountains of France, named "Chaumes" or "Les grandes Chaumes" (comitatus Calvomontensis). Calvomontensis is the Latin for a mountaintop without woods.

As early as 1371, and possibly before, these territories were occupied by cattle herds driven by men, called "marcaires" (from the Alsatian "Malker", Milker in English), pastured there between May and September. When the herds returned to their valleys, the cattle herdsmen first paid the fees and tithes to the religious and political owners of the summer pastures or simply financiers of these migrations.

During feudal times these owners possessed all goods, living creatures, rights of pasture, and cattle. Those who herded were known as serfs. This mountain population paid their debts with cheese and jars of butter. The lords were the first religious establishments, women like chanoinesses from Remiremont or from Andlau, or men such as the chanoines or canons from Murbach or Saint-Dié, Benedictines from Munster, Senones, Moyenmoutier, and other monastic areas.

Political protectors included the duke of Lorraine, count of Salm, count of Ribeaupierre, and other Alsatian noblemen. During the 17th century, this tradition, though disappearing, was maintained in two special places, Gérardmer in the western Lorraine part of the main range and Munster for the east and Alsatian part. Hence the two names of this cheese, gérômé and Munster.