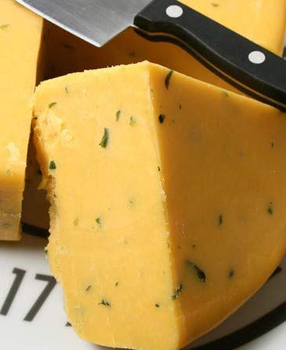 Cotswold (aka Double gloucester with chives and onions)

Cotswold has long been a store and staff favorite. It's a perfect cheese plate component, goes well with fruit, melts well into an omelet, a cheeseburger, or grilled cheese sandwich, and is perfectly matched to beer (Belgian ales, British-style ales, and IPAs) and bright red wines.  I like it in a baked potato, or with a crisp green apple.

Made from whole, pasteurized cow's milk with chopped onions and chives added in, Cotswold is originally from Gloucester county in the Cotswold region of England.

In 1966, an area of approximately 790 square miles of the Cotswolds region was designated as an “Area of Outstanding Natural Beauty” to conserve and enhance the natural beauty of the region. English Cotswold cheese, a variation of "Double Gloucester", was originally made from the rich milk of the black cattle of Gloucester and traditionally made in the Cotswolds.

Cotswold is a mix of chopped chives and onion, coupled with a quality Double Gloucester cheese. This smooth, cheddary delight is a modern rendition of an old British favorite that lacked vegetable ingredients. Similar to cheddar, this cheese is aged for just three to four months so it’s milder, less sharp, and less firm than a well-aged cheddar. Like cheddar, it melts well and is often served melted on slices of bread. It is golden yellow to orange in color.

Similar in flavor to a Cheddar, Cotswold is often featured in the classic pub lunch, and is creamy, buttery, sweet and mild with a strong zing from the onions and chives!