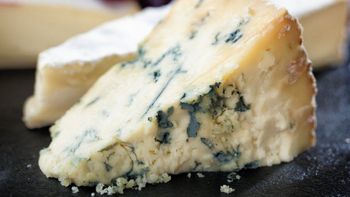 Dating back to 18th Century England, Stilton is a PDO cheese (protected by law).

This means that:
- It can only be produced in three Counties: Derbyshire, Nottinghamshire and Leicestershire
- It must be made from locally produced pasteurized milk.
- It can only be made in a Truckle - a cylindrical shape.
- It must be allowed to form its own natural rind.
- It must never be pressed
- It must have the magical blue veins radiating from the center of the cheese.

Frances Pawlett (or Paulet), a cheese maker of Wymondham, Leicestershire, has traditionally been credited as the person who set modern Stilton cheese's shape and style characteristics in the 1720s, but others have also been named.  A recipe for a Stilton cheese was published in 1721 by Richard Bradley, later First Professor of Botany at Cambridge University.  Another early printed reference to Stilton cheese appeared in William Stukeley's Itinerarium Curiosum, Letter V, dated October 1722. Daniel Defoe in his 1724 work A tour thro' the whole island of Great Britain notes, "We pass'd Stilton, a town famous for cheese, which is call'd our English Parmesan...."

According to the Stilton Cheesemaker's Association, the first person to market Blue Stilton cheese was Cooper Thornhill, owner of the Bell Inn on the Great North Road, in the village of Stilton, Huntingdonshire, (now an administrative district of Cambridgeshire). Traditional legend has it that in 1730, Thornhill discovered a distinctive blue cheese while visiting a small farm near Melton Mowbray in rural Leicestershire — possibly in Wymondham. He fell in love with the cheese and made a business arrangement that granted the Bell Inn exclusive marketing rights to Blue Stilton. Soon thereafter, wagon-loads of cheese were being delivered to the inn. Since the Great North Road, the main stagecoach route from London to Northern England, passed through the village of Stilton, he was able to promote the sale of this cheese and the fame of Stilton rapidly spread.

A 2005 survey by the British Cheese Board reported that Stilton seemed to cause unusual dreams, with 75% of men and 85% of women experiencing "odd and vivid" dreams after eating a one-ounce serving of the cheese half an hour prior to sleeping.

Having a pungent, buttery, nutty flavor, its creamy yet crumbly texture lends itself to a tantalizing treat for the mouth; so much so, it has inspired a sonnet by author G.K Chesterton:

Sonnet to a S​tilton​ Cheese
Stilton, thou shouldst be living at this hour
And so thou art. Nor losest grace thereby;
England has need of thee, and so have I –
She is a Fen. Far as the eye can scour,
League after grassy league from Lincoln tower
To Stilton Cheese on in the fields, she is a Fen.
Yet this high cheese, by choice of fenland men,
Like a tall green volcano rose in power.
Plain living and long drinking are no more,
And pure religion reading “Household Words”,
And sturdy manhood sitting still all day
Shrink, like this cheese that crumbles to its core;
While my digestion, like the House of Lords,
The heaviest burdens on herself doth lay.

Slice it, smear it, or crumble it, Stilton is best enjoyed with any Port wine, sweet Sherry, or jammy Zinfandel.​