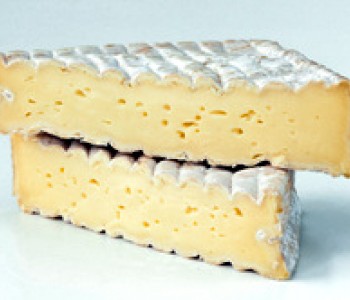 One of France's oldest cheeses, Pont-l'Eveque (pohn leh veck) takes its name from a village in Normandy, the region where the cheese originated centuries ago. Historians believe that its early name was Angelot, a cheese mentioned in a 12th-century document as the dessert served at all the best tables.

Today, its production is largely industrial or cooperative, with only four farmstead producers left - cheesemakers using the milk from their own herd. The large dairies buy their milk from more than 400 farms in Normandy and neighboring Mayenne.

Pont-l'Eveque is an AOC (appellation d'origine controlée, or name-controlled) cheese, so the methods used to make it are tightly defined. Its rind is mostly white, with some buff to reddish coloration. The interior is soft to semi-soft and supple, with a few small eyes and a uniform butter color. Depending on the age and condition of the cheese, the aroma can be robust.