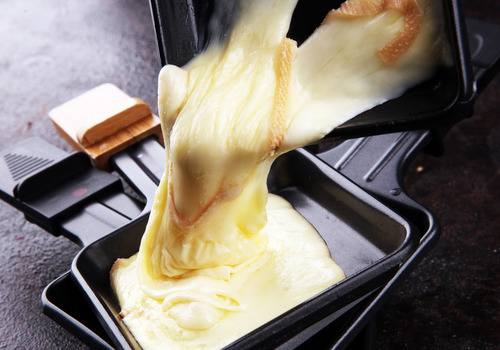 The weather is getting cooler, the days are getting shorter, it’s time for some comfort food, and nothing says comfort louder and clearer than melting cheese.

Raclette is both a type of cheese and a communal meal.

Raclette (the cheese) is a pressed, semi-firm, and a bit pungent cow’s milk cheese that melts easily without liquefying. It tastes similar to Morbier and is made in Switzerland and France.

Raclette (the dish) is a fun method of preparing and serving cheese, meats, vegetables, potatoes, and bread in a festive, communal setting. In Switzerland (and in the Savoie region of France), Raclette is as popular as fondue (leave it to the Swiss to come up with multiple methods to melt cheese!).

The word raclette is derived from the French verb racler, which means to scrape. It refers to how medieval hunters and shepherds in the Swiss canton of Valais would scrape cheese with their hunting knives while sitting around a campfire, melting the cheese near the flames, then dripping it onto crusty bread, over roasted potatoes, sausages, and other preserved meats, to make a hearty campfire meal.

This has evolved through the centuries into a traditional cool-weather indoor treat, where friends and family sit around the Raclette grill, munching on spicy sausages, sliced meats, crunchy pickled vegetables, while drinking Fendant or any other crisp white wine.

In order to prepare this dish, you’ll need a Raclette grill — a small tabletop electric grill with a space beneath it for melting cheese in small 2 to 3-ounce trays; although you could make do with just a stove and a baking sheet, but preparing the meal tableside is half the fun.

Raclette grills are available at most well-stocked kitchen stores and online (which is where we purchased ours). If you don’t have a Raclette grill, you can simply melt the cheese in a sauce pan on the stove top. The result will be the same; all you’ll be missing is the communal melting.

Boil potatoes in their skin until tender, slice in half, and set aside. Set table with meat, pickled veggies, and slices of bread.

Trim the rind off cheese, slice it into eight equal pieces. Place the sausages onto the Raclette grill and cook.

Have each diner take a slice of cheese and place it into their individual Raclette tray and slide it under the grill.

(This is a good time to eat a few slices of ham and some cornichons.)

When the cheese is melted and turning brown at the edges, remove the tray from under the grill.

Scrape the cheese from the tray onto a potato, give it a grind of pepper and/or paprika, and eat.

Put some mustard onto a slice of bread, put a hunk of sausage or meat on the bread, top with a pickled onion and some melted Raclette, and eat.

Wash down with a good amount crisp white wine (in Switzerland, they drink Fendant, made from the local chasselas grape, but any non-oaky light to medium-bodied wine will do), hard cider or beer (legend has it that you will get indigestion if you drink water with Raclette).

If you don’t have a Raclette Grill, simply melt the cheese slowly in a non-stick, sheet pan or pot over low heat.