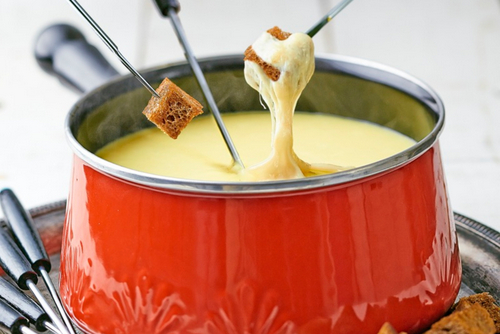 The name Fondue comes from the past participle of the French verb fondre (to melt), so a literal translation would be melted. The name refers to a Swiss dish consisting of bread dipped into a communal pot filled with melted Swiss cheeses.

It’s a soothing, and healthful meal that is easy to prepare, and fun to eat. It makes a great family meal that also works well as a romantic dinner for two, (or three or four - whatever you think is romantic...no judging here!)

A 1699 book published in Zurich, under the name “Kass mit Wein zu kochen” is known for having the earliest known recipe for cheese fondue. It calls for grated or cut up cheese to be melted with wine and for the bread to be dipped in it.

The first known recipe with cheese and wine was published under the name “Cheese Fondue” in 1875.  The success of fondue may be contributed to the introduction of cornstarch to Switzerland in 1905, which made it easier to make a smooth and stable emulsion of the wine and cheese.

Click here to read an article I wrote a few years ago about Fondue that includes a foolproof recipe!