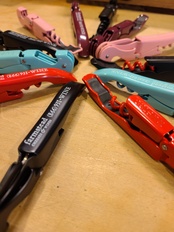 A decent corkscrew is vital when opening a bottle of wine. Without one, you run the risk of a cork crumbling, a bottle breaking, or, worst of all, not drinking the wine!

Here at Farmstead, we've found that the two stage, or waiter's corkscrew is the best option; as it's nearly foolproof, requires little skill to operate correctly, and can be stored anywhere (except in a carry-on suitcase at the airport).

The two stage wine key was designed with professionals in mind, the hinged double-lever system and serrated knife blade make it a breeze to open bottles with both long and short corks. The two-step construction means you rarely break a cork.

Ours are branded and come in an array of groovy colors, and cost only $6.99 each.  So forget that two winged monster that nearly  always fails, the complicated rabbit doo-dah that sometimes pushes the cork INTO the bottle, or the electric model that is bulky and clumsy - try a two stage/waiter's friend/wine key and most likely, it'll become the ONLY wine opener you'll ever need.