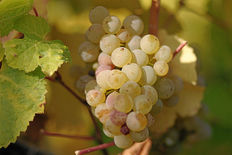 March 13 marks the official 587th birthday for Riesling, the noble grape of Germany.  Two years ago, Wines of Germany and its legion of supporters began to celebrate a page found in the records of Count John IV of Katzenelnbogen. He referenced vines of rieslingen on March 13, 1435, a date historians view as the world’s first written evidence of Riesling.

German grape growing dates back to 50 B.C.E., when the Romans brought viticulture to present-day Germany, but before 1435, grapes like Elbling, Sylvaner, and Räuschling were more common, particularly during the Middle Ages. By the late 1400s and 1500s, there was documented evidence of Riesling in the Rheinhessen and Pfalz regions, as well as the Alsace region of France, which was, at that time, still struggling between French and German rule.

The grape became especially prominent in Germany after a 1787 decree in the Mosel region stated that all “bad” vines must be replaced by Riesling within the next seven years, paving the way for German Rieslings to become well-regarded in both domestic and export markets by the late 1800s and early 1900s. But after a period of plummeting quality, caused by the two World Wars and a plague of cheap, sweet Liebfraumilch, a renewed commitment to excellence brought German Riesling back to prominence in the 1980s and 1990s. Combined with changing consumer preferences embracing unoaked, fresh whites and warmer annual temperatures that allow Riesling to ripen fully, the quality of Riesling, particularly from Germany, is now recognized internationally. Though Germany grows far more Riesling than any other country – 23,800 hectares, or roughly 58,800 acres – the grape is now produced in Austria, France, Italy, the U.S., Australia, New Zealand, and beyond.