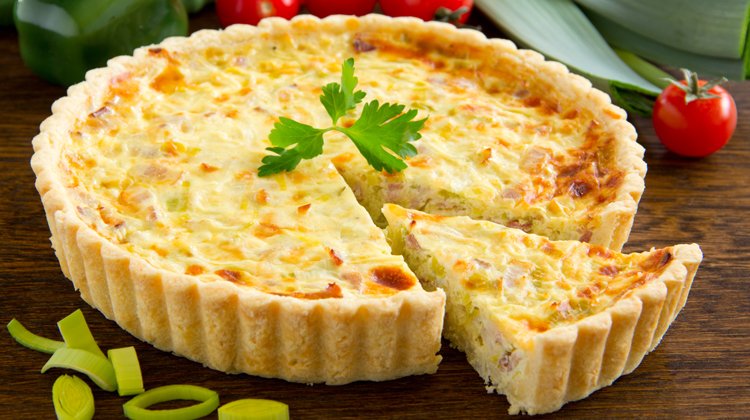 May 20th is not only a time to make some Quiche Lorraine at home, but it's also a time to listen to a silly song by the B-52s (whose song isn't about the cheese and bacon pie, rather a green poodle).

While Quiche Lorraine is believed to have originated in the Lorraine region of France, hence the name, historical historical records indicate that quiche actually originated in Germany in the middle ages in the medieval kingdom of Lothringen, which the French later occupied and renamed Lorraine. The word ‘quiche’ is from the German ‘Kuchen’, meaning cake.

The original Quiche Lorraine consisted of an open pie, made using a bottom crust with a filling of custard and cubes of port fat.

The cheese was added to the recipe at a much later time. Today, you’re more likely to find it made with bacon cubes rather than fat, but it’s just as tasty.  Usually, recipes call for Gruyère or Comté cheese, but you can use all sorts if you wish.

Traditionally, a Lorraine doesn’t include onions – if you do pop onions in your Quiche Lorraine, you’re making a Quiche Alsacienne (the Alsace is to the north of the Lorraine).

Quiche became popular in England sometime after the Second World War, and then in the U.S. during the 1950’s.  Because of its primarily vegetarian ingredients, it was considered a somehow ‘unmanly’ dish, – “real men don’t eat quiche.” Today, one can find many varieties of quiche, from the original quiche Lorraine, to broccoli, mushrooms, ham, and/or seafood (primarily shellfish). Quiche can be served as an entrée, for lunch, breakfast, or an evening snack.

HOW TO OBSERVE  Buy some Gruyère or Comté from us and hone your culinary skills with this easy Quiche Lorraine recipe.