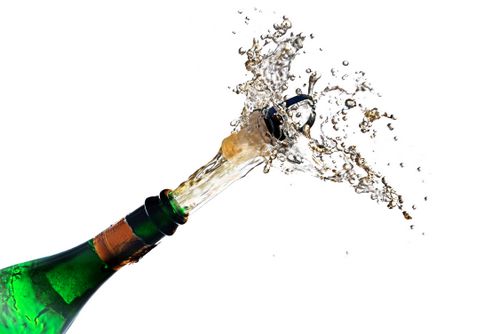 The first Saturday in June has been deemed National Bubbly Day, a great time to open a bottle of Champagne, Crémant, Cava, Lambrusco, Prosecco, Moscato d'Asti, or Sekt.

Sparkling wine is a wine with significant levels of carbon dioxide in it, making it fizzy. While the phrase commonly refers to Champagne, EU countries legally reserve that term for products exclusively produced in the Champagne region of France.

Sparkling wine is usually either white or rosé, but there are many examples of red sparkling wines such as the Italian Brachetto, Bonarda and Lambrusco, and the Australian sparkling Shiraz. The sweetness of sparkling wine can range from very dry brut styles to sweeter doux varieties (French for 'hard' and 'soft', respectively).

The sparkling quality of these wines comes from its carbon dioxide content and may be the result of natural fermentation, either in a bottle, as with the traditional method (methode Champenoise), in a large tank designed to withstand the pressures involved (as in the Charmat process), or as a result of simple carbon dioxide injection in some cheaper sparkling wines.

Sparkling wines are produced around the world, and are often referred to by their local name or region, such as Prosecco, Franciacorta, Trento DOC, Oltrepò Pavese Metodo Classico and Asti from Italy (the generic Italian term for sparkling wine being spumante), Espumante from Portugal, Cava from Spain, and Cap Classique from South Africa.

Sparkling wines have been produced in Central and Eastern Europe since the early 19th-century. "Champagne" was further popularised in the region, late in the century, when József Törley started production in Hungary using French methods, learned as an apprentice in Reims. Törley has since become one of the largest European producers of sparkling wine. The United States is a significant producer of sparkling wine today, with producers in numerous states. Recently, the production of sparkling wine has re-started in the United Kingdom after a long hiatus.

Effervescence has been observed in wine throughout history and has been noted by Ancient Greek and Roman writers, but the cause of this mysterious appearance of bubbles was not understood. Over time it has been attributed to phases of the moon as well as both good and evil spirits. The tendency of still wine from the Champagne region to lightly sparkle was noted in the Middle Ages but this was considered a wine fault and was disdained in early Champagne winemaking although it made the pride of other historic sparkling wine production areas like Limoux.

Dom Pérignon was originally charged by his superiors at the Abbey of Hautvillers to get rid of the bubbles since the pressure in the bottles caused many of them to burst in the cellar. Later, when deliberate sparkling wine production increased in the early 18th century, cellar workers would still have to wear a heavy iron mask that resembled a baseball catcher's mask to prevent injury from spontaneously bursting bottles. The disturbance caused by one bottle's disintegration could cause a chain reaction, with it being routine for cellars to lose 20–90% of their bottles to instability.

The mysterious circumstance surrounding the then-unknown process of fermentation and carbonic gas caused some critics to call the sparkling creations "The Devil's Wine".

The British were the first to see the tendency of wines from Champagne to sparkle as a desirable trait and tried to understand why it produced bubbles. Wine was often transported to England in wooden wine barrels where merchant houses would then bottle the wine for sale. During the 17th century, English glass production used coal-fueled ovens and produced stronger, more durable glass bottles than wood-fired French glass. The English also rediscovered the use of cork stoppers, once used by the Romans but forgotten for centuries after the fall of the Western Roman Empire. During the cold winters of the Champagne region, temperatures would drop so low that the fermentation process was prematurely halted—leaving some residual sugar and dormant yeast. When the wine was shipped to and bottled in England, the fermentation process would restart when the weather warmed and the cork-stoppered wine would begin to build pressure from carbon dioxide gas. When the wine was opened, it would be bubbly.

In 1662, the English scientist Christopher Merret presented a paper detailing how the presence of sugar in wine led to it eventually sparkling and that by adding sugar to a wine before bottling it, nearly any wine could be made to sparkle. This is one of the first known accounts of understanding the process of sparkling wine and even suggests that British merchants were producing "sparkling Champagne" before the French Champenois were deliberately making it.

How to celebrate:  come to Farmstead and buy a bottle of bubbly.  Take it home, chill it down, open, pour, drink, repeat.