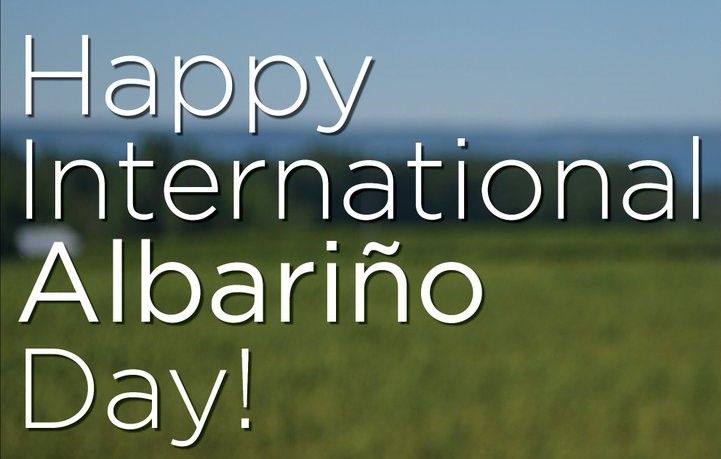 International Albariño Day was inspired by the annual Fiesta del Albariño held in the small Northeastern coastal town of Cambados, Spain during the first week of August.

Albariño is traditionally grown in Rias Baixas, a wine region in Galicia in northwestern Spain, and is considered one of the country’s finest white wines.

Its lower alcohol and crisp acidity make it an ideal wine for summer evenings and seafood pairings. It is also grown in Portugal, where it is known as Alvarinho.

Now it is being grown in North America, and with so many excellent examples being produced, we believe it is time to celebrate, along with our Spanish and Portuguese counterparts, International Albariño Day!

It was presumably brought to Portugal by Cluny monks in the twelfth century. In Galician, its name "Albariño" comes from albar, and this from albo, both meaning "white, whitish" (and in Portuguese "Alvarinho" "Alvarano" from alvar and alvo), and those from Latin albus, "white."

It was locally thought to be a Riesling clone originating from the Alsace region of France, although the earliest known records of Riesling as a grape variety date from the 15th, rather than the 12th, century. It is also theorized that the grape is a close relative of the French grape Petit Manseng, although much of the preceding paragraph is conjecture.

The best Albarinos combine aromas and flavors that are both fruity and floral.  Fresh acidity balances the full body and firm structure, and there can often be a marine note, reminding you how well these wines go with seafood.

How to celebrate:  go to Farmstead, and buy some Albariño (including a bottle or two of  Los Chucaquis, our locally madeand amazing Albariño Pét-Nat). Go home, open wine, drink.   Repeat.