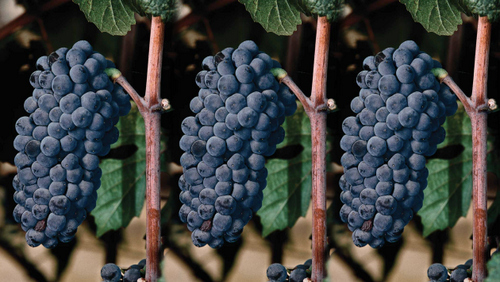 Originally planted in Burgundy and beloved by winemakers and winos around the globe, this finicky, hard-to-grow grape has found a home in many of the world's great wine-growing regions and has legions of fans around the globe.

It's been the subject of a hit movie (that both raised awareness and love for the grape while almost destroying Merlot's reputation in the USA), and the obsession of collectors around the globe.

The United States has increasingly become a major Pinot noir producer, with some of the best-regarded coming from the Willamette Valley in Oregon and California's Sonoma County with its Russian River Valley and Sonoma Coast appellations. Lesser-known appellations can be found in Mendocino County's Anderson Valley as well as the Central Coast's Santa Lucia Highlands appellation and the Santa Maria Valley & Sta. Rita Hills American Viticulture Area in Santa Barbara County. In New Zealand, it is principally grown in Martinborough, Marlborough, Waipara and Central Otago.

The leaves of Pinot noir are generally smaller than those of Cabernet Sauvignon or Syrah and the vine is typically less vigorous than either of these varieties. The grape cluster is small and conico-cylindrical, vaguely shaped like a pine cone. Some viticultural historians believe this shape-similarity may have given rise to the name.  In the vineyard Pinot noir is sensitive to wind and frost, cropping levels (it must be low yielding for production of quality wines), soil types, and pruning techniques. In the winery, it is sensitive to fermentation methods, yeast strains and is highly reflective of its terroir with different regions producing sometimes very different wines. Its thin skin makes it susceptible to bunch rot and similar fungal diseases of the bunch. The vines themselves are susceptible to powdery mildew, and in Burgundy (and elsewhere) infection by leaf roll and fanleaf viruses causes significant vine health problems.

These complications have given the grape a reputation for being difficult to grow: Jancis Robinson calls Pinot a "minx of a vine" and André Tchelistcheff declared that "God made Cabernet Sauvignon whereas the devil made Pinot noir."   It is much less tolerant of hard, windy, hot and dry, harsh vineyard conditions than the likes of Cabernet Sauvignon, Syrah, Merlot, or Grenache.   However, Pinot noir wines are among the most popular in the world.

Joel Fleischman of Vanity Fair describes pinot noir as "the most romantic of wines, with so voluptuous a perfume, so sweet an edge, and so powerful a punch that, like falling in love, they make the blood run hot and the soul wax embarrassingly poetic." Master Sommelier Madeline Triffon calls Pinot "sex in a glass".

The tremendously broad range of bouquets, flavors, textures, and impressions that Pinot noir can produce sometimes confuses tasters.  In the broadest terms, the wine tends to be of light to medium body with an aroma reminiscent of black and/or red cherry, raspberry, and to a lesser extent currant and many other fine small red and blackberry fruits. Traditional red Burgundy is famous for its savory fleshiness and 'farmyard' aromas (sometimes associated with thiol and other reductive characters), but changing fashions, modern winemaking techniques, and new easier-to-grow clones have favored a lighter, more fruit-prominent, cleaner style.

The wine's color when young is often compared to that of garnet, frequently being much lighter than that of other red wines. This is entirely natural and not a winemaking fault as Pinot noir has a lower skin anthocyanin (coloring matter) content than most other classical red/black varieties.

However, an emerging, increasingly evident, style from California and New Zealand highlights a more powerful, fruit-forward and darker wine that can tend toward Syrah (or even new world Malbec) in depth, extract, and alcoholic content. Pinot noir is also used in the production of Champagne (usually along with Chardonnay and Pinot Meunier) and is planted in most of the world's wine-growing regions for use in both still and sparkling wines. Pinot noir grown for dry table wines is generally low-yielding and of lesser vigor than many other varieties, whereas when grown for use in sparkling wines (e.g. Champagne) it is generally cropped at significantly higher yields.

How to Celebrate: Come into Farmstead, buy some Pinot Noir.  Drink.  Repeat if necessary.

Pinot pairs neatly with most proteins cooked in a wide variety of styles, as well as earthy, and rustic vegetables, and bright-red to black fruits like cherry, cranberry, or plum.  Try it with Fuller-bodied seafood like salmon, halibut, or trout; all manner of pork;  grilled meats and vegetables from chicken to venison; braised meats and stews; root vegetables and mushrooms, especially mushrooms, poultry like chicken or duck (especially duck).