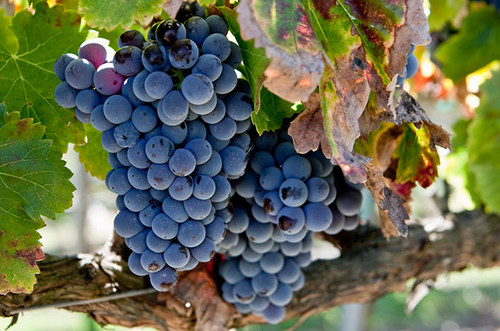 Clear your calendars!  Every year on the third Friday in September, we celebrate  International Grenache Day, a day when Grenachophiles around the world come together and drink Grenache-based wines!

Deep within Aragon, a region in the north of Spain, a deep purple-red jewel dangles in bunches from among vibrant green leaves. It has grown in the warm sun of its native land, filling with characteristic berry-type sweetness and just a touch of spiciness that makes it incredibly interesting to fans of wine.

This is the Grenache grape, which was at one time known as the Red of Aragon (Tinto Aragonés). Grenache Day celebrates the august history of this grape and the contributions it has made to some of the world’s most delightful wines.

The unmistakable candied fruit roll-up and cinnamon flavor is what gives Grenache away to expert blind tasters. It has a medium to full weight in taste, but has a deceptively lighter color and is semi-transulcent. Depending on where it’s grown, Grenache often lets off strong smells of orange rinds and ruby-red grapefruit. When Grenache is grown in Old World regions such as Côtes du Rhône and Sardinia, it can have herbal notes of dried oregano and tobacco.

Grenache's spiciness makes it a perfect pairing buddy to spiced and herby foods including roasted meats, vegetables, and many ethnic foods. Alcohol is a solvent to capsacin, which is the heat unit in spicy food, so a high-alcohol Grenache can help reduce the burn of spicy food.