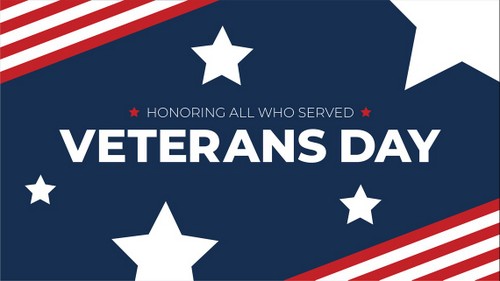 November 11, is Veterans Day in the USA, and Armistice Day or Remembrance Day elsewhere around the world.   Take a moment to thank a vet for their service to our country.

Veterans Day is NOT the Same as Memorial Day.   Memorial Day is a time to remember those who gave their lives for our country, particularly in battle or from wounds they suffered in battle; while Veterans Day honors all of those who have served the country in war or peace — dead or alive — although it’s largely intended to thank living veterans for their sacrifices.

It was originally called Armistice Day, commemorating the end of World War I.  World War I officially ended when the Treaty of Versailles was signed on June 28, 1919. However, the fighting ended about seven months before that when the Allies and Germany put into effect an armistice on the eleventh hour of the eleventh day of the eleventh month.   For that reason, Nov. 11, 1918, was largely considered the end of “the war to end all wars” and dubbed Armistice Day. In 1926, Congress officially recognized it as the end of the war, and in 1938, it became an official holiday, primarily a day set aside to honor veterans of World War I.  But then World War II and the Korean War happened, so on June 1, 1954, at the urging of veterans' service organizations, Congress amended the commemoration yet again by changing the word “armistice” to “veterans” so the day would honor American veterans of all wars.

World War I was a multinational effort, so it makes sense that our allies also wanted to celebrate their veterans on Nov. 11. The name of the day and the types of commemorations differ, however.  Canada and Australia both call Nov. 11 “Remembrance Day.” Canada’s observance is pretty similar to our own, except many of its citizens wear red poppy flowers to honor their war dead. In Australia, the day is more akin to our Memorial Day.  Great Britain also calls it “Remembrance Day,” too, but observes it on the Sunday closest to Nov. 11 with parades, services, and two minutes of silence in London to honor those who lost their lives in war.