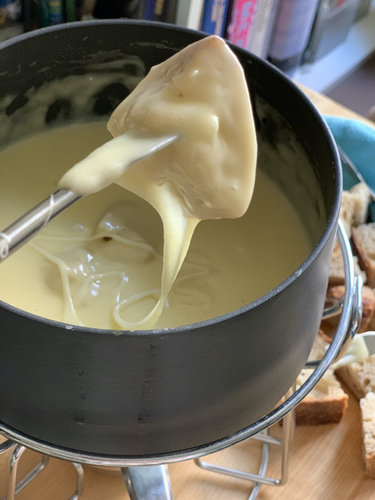 Personally, I can’t think of a better way to eat some cheese.

The name Fondue comes from the past participle of the French verb fondre (to melt), so a literal translation would be melted. The name refers to a Swiss dish consisting of bread dipped into a communal pot filled with melted Swiss cheeses. It’s a soothing, and healthful meal that is easy to prepare, and fun to eat. It makes a great family meal that also works well as a romantic dinner for two.

It’s a soothing, and healthful meal that is easy to prepare, and fun to eat. It makes a great family meal that also works well as a romantic dinner for two, (or three or four - whatever you think is romantic...no judging here!)

A 1699 book published in Zurich, under the name “Kass mit Wein zu kochen” is known for having the earliest known recipe for cheese fondue. It calls for grated or cut-up cheese to be melted with wine and for the bread to be dipped in it.

The first known recipe with cheese and wine was published under the name “Cheese Fondue” in 1875.  The success of fondue may be contributed to the introduction of cornstarch to Switzerland in 1905, which made it easier to make a smooth and stable emulsion of the wine and cheese.

Fondue became popular in the US in the late 1950s, and remained a popular dish into the 60s and 70s. It’s enjoyed a latter day renaissance that coincides with the increase in Americans’ appetite for fine cheeses, as well as an appreciation for retro and comfort foods.

In fact, we Americans love fondue so much, we’ve reinvented it to near unrecognizability!

Cheese fondue always has the same core ingredients, although each of Switzerland’s 23 cantons has its own variation. Those core ingredients are Gruyère and/or Emmenthaler cheese, cornstarch or flour, kirsch (cherry brandy), garlic, and dry white wine.

The cornstarch or flour is added to prevent the mixture from curdling, and the wine and brandy, while adding flavoring, lower the boiling point so that the cheese proteins don’t separate.

My favorite recipe adds some softer cheeses – Appenzeller, Raclette, and/or Vacherin Fribourgeois- which add complexity, a bitter component, and depth.

Fondue is made in a fondue pot or caquelon that is made of either earthenware, glazed ceramic or enameled cast iron. The fondue is heated on a cooktop in the caquelon over low to medium heat then transferred to the table and placed over an alcohol burner or a hot plate.

Crusty chunks of bread (a baguette, sourdough or an Italian loaf all work fine) are placed onto long forks, which are then dipped into the caquelon, twirled to expel the excess, and then popped into the mouth.

Try the recipe below for a fun and nostalgic meal.

Fabulous Swiss Fondue (serves four) (adapted and modified from The Joy of Cooking and Epicurious.com)

1 to 1 1/2 inch cubes of crusty French, Sourdough, or Italian bread

Fondue forks or wooden skewers
Caquelon or Fondue pot
—
Grate the cheese using the large holes of a box grater.
Toss the cheese in one half of the cornstarch
Rub the inside of a caquelon or heavy pot with cut sides of garlic.

Add wine and lemon juice to pot and bring to a slow simmer over low/moderate heat.

Stir together the remaining cornstarch and kirsch in a cup.

Gradually add cheese by the handful to pot, stirring constantly in a zigzag pattern to prevent cheese from balling up, until cheese is just melted and creamy.

Bring fondue to a slow simmer and cook, stirring, until thickened, 5 to 8 minutes.

If you aren’t preparing the fondue in a caquelon, transfer to heated caquelon set over a flame.

Serve with bread for dipping.

If the fondue becomes too thick, add some additional kirsch.
Spear the bread cubes with fondue forks and dip them into the fondue.