Kopriva Chardonnay We've been carrying this lively and bright unoaked Carneros Chardonnay since their first commercial vintage; both staff and customers love its fresh attack, lack of malo-lactic fermentation, and crisp and clean mouthfeel.

It's a perfect foil for most lighter foods, as the lack of oak and butter flavors complements anything from soups to fish, to poultry.  All the Chardonnay grapes are from vineyards within the Carneros American Viticultural Area (AVA) of Sonoma County.

It's an unoaked, stainless steel fermented, 100% Chardonnay without any secondary fermentation. Noted for its cooler growing season of morning fog, afternoon wind and cold nights, the Carneros AVA allows the grapes to slowly develop mature flavors while maintaining high acidity. This enables Kopriva to produce a crisp and delicate white wine that exhibits the highest qualities the Chardonnay grape can express.

The SF Examiner agrees: "Kopriva embraces all of what Chardonnay can be, a reflection of a place, in this case, the Carneros AVA in Sonoma County. The terroir yields a purity of fruit from a cool climate of fog and wind which allows the grapes to slowly develop ripe flavors but still keep the acidity high...."

Jean-Benoît Cavalier took direction of the property in 1984, just after finishing a degree in Agricultural Engineering. In 1990, he consolidated the vineyards, restructured the ancient cellars, and created the official domain, Château de Lascaux. Today, over twenty-five years later, the domain has expanded from 60 to 210 acres of vineyards, surrounded by 750 acres of forest, filled with green oaks, pines, and garrigue**.

The quiet isolation of this part of the region, coupled with its proximity to both the sea and the mountains, makes this microclimate so unique. It is nestled along the foothills of the Cevennes, a mountain range that sits in the heart of the Midi. These foothills protect the vines from the cool Mistral and Tramontagne winds, and bring more rain to an otherwise dry climate.  That this temperate zone brings a long, slow ripening of the grapes only adds to the wines’ complexity. The stony soil lends finesse and freshness to his wines, giving the reds greater aging potential than Syrah-based wines grown in other Languedoc soils.

The proliferation of garrique certainly is reflected in the aromatics, where notes of laurel, thyme, rosemary, réglisse, and mint are present in the wines. Jean-Benoît is passionate about supporting the richness and diversity of this ecosystem, so the domaine’s conversion to organic viticulture was a logical choice.   There is a freshness and purity, finesse and complexity in the Lascaux wines that is rare in this wild landscape. The consistency of the winemaking, the quality of their wines, and great values they present make this domaine a treasure.

Not far from the Languedoc’s spectacular vertical limestone outcropping known as Pic Saint Loup, thirteenth-generation vigneron Jean-Benoît Cavalier runs the historic Château de Lascaux. While Pic Saint Loup is renowned for its red wines and also has an appellation dedicated to rosé, the area is equally conducive to the production of high-quality whites. Situated at the foot of mountains that bring cool winds and close enough to the Mediterranean to benefit from its moderating influence, the vines enjoy perfect conditions to achieve balanced ripeness year after year. This blend of Rolle (Vermentino), Roussanne, Marsanne, and Viognier combines a sun-kissed roundness on the palate with the crisp liveliness conferred by the unique microclimate and rocky limestone soils. With notes of lemon and garrigue herbs plus a stimulating mineral element, the Lascaux blanc is the ideal match for Mediterranean fish preparations. Alternatively, chill a bottle for your apéritif and savor its breezy freshness.

The vineyards are the property of the Bonfils Family and occupy sections in the sub areas of Minervois and Corbieères.  The name La Domitienne is named after the ancient road, Via Domitian which divides the two growing zones, one in the North and the other in the South. The Via Domitia was the Roman road that allowed Roman soldiers to control all of Southern Gaul.

The Mourvèdre Rosé is 85% Mourvedre and 15% Grenache, from three vineyards in the Mont Baudile, Domaine de Saint-Saturnin region.   The wine was fermented with indigenous yeast, aged in stainless steel and cement tanks.   Trace amounts of sulfur were added at bottling.

The Grenache Gris Rosé is from St Guilhem le Désert region.  Saint-Guilhem-le-Désert is a commune in the Hérault department in the Occitanie region in southern France. Situated in the narrow valley of the Gellone river where it meets the steep-sided gorge of the Hérault River, Saint-Guilhem-le-Désert is essentially a medieval village located on the Chemin de St-Jacques pilgrim route to Santiago de Compostella.  Like the Mourvèdre, the wine was fermented with indigenous yeast, aged in stainless steel and cement tanks.   Trace amounts of sulfur were added at bottling. 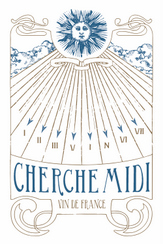 The Cherche Midi wines are blended especially for Paris Wine Company by Benjamin Beguin and Aurore de Fleurieu from organically-farmed, estate vineyards in Montfrin, located at the border between the Rhône Valley and the Languedoc. The wines are crafted to be enjoyable, easy to drink straight away, and to offer great value for organic wine from the south of France.

The vineyards were originally planted by Aurore's father, Jean-René de Fleurieu. There's a lot to say about his illustrious and intellectual family. His grandfather was the founder of Les Echos, a national economic newspaper, and his grandmother was a radical feminist senator. Jean René is also a filmmaker and co-founded the well-known Paris fashion brand, Agnes B. He also has a wooly mammoth skeleton in his tank room. Jean-René grew up in Montfrin, and in 1993, he decided to plant 100 hectares of olive trees and 100 hectares of vines in order to create local jobs and make delicious and affordable wines that have always been produced organically.

In colloquial French, a “cherche midi” or “noon-seeker” means someone who is looking to invite themselves in for a free lunch, so this bottle is a perfect tool to have in hand for all the “Cherche Midis” out there.

60% Syrah, 30% Grenache, 10% Cabernet, this wine is medium bodied with aromas of blackberries and baking spices. On the palate there are flavors of dried raspberry, blackberries, rosemary, black pepper, and savory, spiced charcuterie.

Casa Santos Lima was created several generations ago by Joaquim Santos Lima, who, by the turn of 19th century, was already a great producer and exporter of Portuguese wines. Maria João Santos Lima and José Luís Santos Lima Oliveira da Silva, granddaughter and great grandson of the founder, relaunched Casa Santos Lima in 1990, replanting most of the vines, improving agricultural techniques and modernizing all its productive structure. Since 1996, Casa Santos Lima, started bottling its own brands , which immediately achieved great success both in national and international markets.

I have visited the winery, and remain amazed that they are able to produce so many wines (over 60 different labels) at such a sustained quality level, especially for the price.  We used to carry one of their wines, but changes in distributors had raised the price so that it is no longer a value, and we have replaced it with this bottling.   Same grapes, same fermentation, different label.

This super fun wine is characterized by its aromatic exuberance, with notes of red fruits and vanilla. In the mouth it is fruity with velvety notes of red ripe fruits, balanced by spice, chocolate, and just a hint of oak. An elegant wine with soft tannins and a fruity finish.

Previously destemmed, the grapes went through a low temperature pre-fermentative maceration for 24 hours. The alcoholic fermentation was completed at low temperatures in stainless steel vats for 14 days. Skin contact maceration with (submerged) cap for 28 days. Partial ageing in oak barrels.

This 100% Cabernet Sauvignon wine comes from the eastern ends of the Entre-deux-Mers appellation (which is designated for whites only, thus the generic "Bordeaux" label). It is full of black fruits that balance the firm, dry tannins. Juicy acidity bursts in at the finish.   Winner of a gold medal from the Concours Générale Agricole de Paris.

Réserve Grand Marchand belongs to the Barthez Family. Jean Marc Barthez, his wife Eliane, and their children are working at the property and in their vineyard with the care and the experience of old generation vine growers.