“Hinter der Mauer” is an Austrian-German term that Graham Tatomer learned while working harvest in Austria at Emmerich Knoll which roughly translates to “your back against the wall”.  The room between the walls of the terraces of the vineyard and the vines he would work on was very tight and this feeling of having your back against the wall is something very familiar during the COVID-19 pandemic. This wine is an homage to his time in Austria working these vineyards and is expressed through these diverse sites throughout the Central Coast of California.

SF Chronicle's Wine of The Week - From one of California's leading Austrian-inspired Riesling producers--which, granted, is a small but dedicated pool of talent--Graham Tatomer has made this new white blend inspired by the white wines of Austria. There's 80% Grüner Veltliner plus 20% dry Riesling in the cuveé. The vineyard sources are Kick-on Ranch, John Sebastiano, Paragon, Oliver’s, and La Estancia.  Try this Austrian-inspired wine as refreshment before dinner, or with roast chicken, or fish.

Hock is Field Recording's take on an Edelzwicker, an easy-drinkable, aromatic white wine blend that is very common in the Alsace region of France, across the Rhine from the Pfalz wine region in Germany.  Winemaker Andrew Jones:  "My favorite table wines are Alsatian Blends and it’s one of my favorite old world wine regions. This wine is pretty much dry, with just a touch of residual singular in it to balance the acidity."

The blend is mostly Pinot Gris (65%), with Riesling (32%) and a skosh of Gewurztraminer (3%) to amp up the aromatics a bit more, from the Central Coast vineyards.  The Pinot Gris and Riesling were fermented in stainless steel, while the Gewurz was fermented in old Acacia barrels, all aged for six months before bottling.

Low in alcohol (11.1%), look for zesty flavors of apricot, lemon zest, Bartlett pear, freshly mown hay, and a hint of petrol.  This is a perfect food wine - in the Alsace, Edelzwickers are paired with bold, hearty foods, strong cheeses, and braised spicy meats.  Here, try it with Asian or Asian-inspired food, as an aperitif.

Between Fableist, Wonderwall, Neverland, Fiction, and Field Recordings, we carry more wines made by Andrew Jones than any other winemaker - over 20 SKUs and growing.  Why?  His wines are varietally correct, reflect a sense of place, follow sustainable farming practices, and punch well above their weight class in the value department.

The Pinot Project Rosé wines are proprietary wines made for Skurnik Imports and at present features wine from France and Italy.  These are bright, fun wines, made for easy consumption at parties, picnics, on the porch, etc.   The French entry is made from Pinot Noir grapes, sourced from the Languedoc, home to some of the finest rosés in the world.  The grapes are gently pressed and the juice remains on the skins just long enough to give the wine its pale pink hue.  The rosé is vinified in stainless steel to preserve its mineral core and juicy freshness.

One of my favorite places on the planet is the Süd Tirol, or Alto Adige as it's called in the rest of Italy.  Long part of the Austo-Hungarian empire (ceded to Italy after World War One), this alpine region is surrounded on three sides by the stunning Dolomites (part of the Southern Limestone Alps).

It's this mountain range that help to produce the soils that make Alto Adige so special. The broad spectrum of soils range from volcanic porphyry (in Merano, Bolzano, and Kaltern) to weathered primitive rock soils composed of quartz and mica (the Isarco Valley) to limestone and dolomite (the Bassa Atesina) to sandy marl (south of Kurtatsch), offering just the right underlayer to each grape variety.

Perhaps it's because of because of the contrast between the warm summers and cold winters of vineyards grafted on to the Dolomite foothills. With its generally cool nights even in the height of summer, Alto Adige is able to produce some very focused flavors and a degree of finesse.  In the more northern part of the appellation, farms tend to be smaller, and it is often economically infeasable for for small farmers to produce and market wine.

Colterenzio was formed in 1960, when 28 farmers formed a cooperative in order to gain their independence from the wine merchants of the time. These rebels named the newly-founded cooperative after their homeland, the small hamlet of Schreckbichl, (Colterenzio in Italian).

Alto Adige wines tend to be brighter, less reliant on oak, focused and clean, and these value priced wines from Colterenzio are benchmarks of those descriptors.

These are all value priced wines, that hopefully will find their way regularly into your homes and into your glasses.

Made from co-fermented Schiava (aka Vernatsch) (95%) and Lagrein grown in stony, glacial sedimentary soils and aged in larger older wooden casks,  this offers bright wild berry and cassis flavors backed by black olive and licorice. 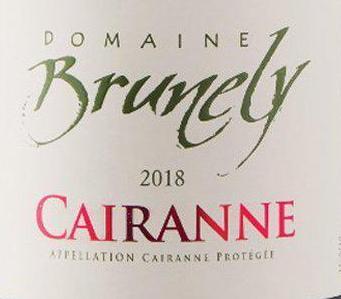 Domaine Brunely 2018 is an earthy Cairanne with lush raspberry, dried wild herbs, and spicy flavors on the palate. Produced from Syrah, Grenache, and Carignan wine grapes from vines averaging 10 to 45 years of age. Aged up to 12 months in concrete tanks

Domaine Brunely has been in the Carichon family for three generations and is one of more larger and well-known producers in Vacqueyras, which is the house specialty.  Total holdings include 198 acres of vines spread between Vacqueyras, Cairanne, Ventoux, Gigondas, and Chateauneuf-du-Pape.

Stylistically, winemaking veers towards the traditional spectrum here, where no wood is used other than in their Chateauneuf-du-Pape.  Farming is natural. The average age of the vines is 30-years old, with very stony soils consisting of garrigues silico-limestone.

90 points, Parker:  "A blend of 50% Grenache, 30% Syrah, 15% Carignan and 5% Cinsault, Brunely's 2018 Cairanne starts off earthy, but give it a few minutes in the glass, and raspberry fruit emerges, alongside hints of garrigue and subtle spice elements. Medium to full-bodied, it's supple and silky in texture, with a mouthwatering finish. It's fun, easy-drinking stuff, without being simple or one-dimensional. 90 points." - 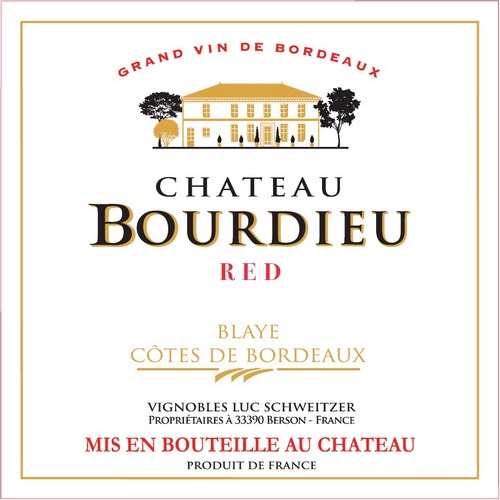 Chateau Bourdieu Blaye Cotes de Bordeaux offers a beautiful red ruby color deep and intense. It exhales red fruits and blackcurrant aromas, completed by notes of redcurrant. The mouthfeel is round and juicy, with smooth, well-integrated tannins that offer a nice structure and a long finish.

The judges at Decanter’s 2020 World Wine Awards evaluated 8,642 red wines this year, and Château Bourdieu's 2019 Cotes de Bordeaux was one of just five Bordeaux to score 97 points or higher (it was in good company alongside Bellevue Cardon Pauillac and Haut-Breton Margaux). Yes, there is plenty to smile about in this blend of 87% Merlot, 10% Cabernet Sauvignon and 3% Cabernet Franc: "Flamboyant and deep, with ample, lush and fresh forest fruits, bramble and cassis, with cascading sweet spice swiftly following. A super, brooding wine that will shine brighter with time. 97 points." - Decanter World Wine Awards.

A little shy at the beginning, it opens up to fantastic black raspberry and warm plum, with accents of savory leather, tobacco leaf, allspice, cedar, and crushed violet. By the time the last spicy and herbal notes finish lingering on your palate, your head will be awash in the glory of Bordeaux, and the bargain price will be the last thing on your mind.

Château Bourdieu dates back to the 15th century, but its modern history goes back to proprietor Luc Schweitzer’s youth: On his way to boarding school, he’d pass by and gaze at the estate, and as time went on, he became more and more determined that someday he’d own the gorgeous château. Over the years, Luc—who came from a family of Algerian grape growers—gained an even deeper appreciation for the limestone-rich terroir in Bourdieu’s sub-region of Blaye, and finally, in 1993, he realized his goal by purchasing the estate.

Ever since he took over at Bourdieu, Luc has had his mind on improvement. At the end of the first harvest, he had a new cellar built and expanded the winery’s quality by fine-tuning the winemaking with stainless steel tanks and temperature control. His efforts have not gone unnoticed: Just last year, Forbes singled Bourdieu out for making outstanding value wines that capture power “while still respecting the seduction of subtlety.”