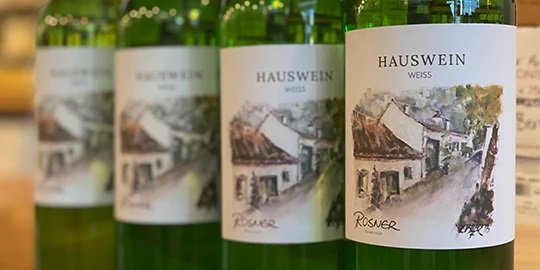 It's no stretch to say that Stefan Rosner is a rising star on the Austrian wine scene.    Having recently taken over the reins from his father Norbert, who converted the vineyards to organic farming,Stefan works in a tiny underground cellar that is cut into the stone beneath one of the oldest vineyards in Langenlois, Austria (one of a handful that Stefan’s family has been farming since the late1800s).

Just a few steps from well-known neighbors like Brundlmayer, Stefan produces wine in an impressive diversity of styles: from the angular freshness of his screw-cap Gruner, Rose’, and Zweigelt, to the savory skin-fermented “Wildrose” whites, up to the startlingly deep and layered “reserve” level Rieslings, Grüners and varietal reds from single crus. Extremely attentive farming, straight-shooting, and open/warm-hearted people.

Stefan notes that “our vineyards are free from chemical fertilizers and herbicides due to the great work of my father for more than a decade now (Certified Organic since 2010). It is important for me to also pursue a more natural approach during processing and fermenting of the wines.” And those philosophies are evident in today’s liter of Grüner Veltliner. Although labeled as a generic “landwein,” this is anything but as it is a masterful blend of their premier, organically farmed vineyard sites,  from the 2021 vintage. In the winery, it’s all about a quick, natural process: unmanipulated fermentation and a brief stainless steel maturation on lees.

Stefan Rosner’s liter of Grüner is delicious and thirst-quenching, all while retaining the hallmarks of this über-classic Austrian grape. It cascades out of the bottle with unrivaled freshness and a dazzling mixture of zesty citrus, light spice, damp white flowers, arugula, white pepper, and beautifully ripe green apple. This is unequivocally pure, deeply refreshing Grüner Veltliner with organic grapes, moderate alcohol, and an unadulterated process in the cellar, it’s also a liberating, guilt-free drinking experience! The Durante Family Estate is based in the Piave DOC in Northeastern Italy. This is a region more known for Prosecco, and the still wines rarely make it out of Italy.

Father Lino and his sons Ivano and Michele Durante pour their hearts and souls into their small family farm. Certified organic and practicing biodynamic since 1998, the trio believes that farming this way produces better wines.

There are oceans of bland and boring Italian Pinot Grigio wines out there, but this puppy stands in stark contrast to the Santa Margheritas of the world. Fermented with native yeasts on the skins, this one offers up bold and exotic aromatics, a rich texture, and an orange wine-like style.

From a tiny, certified organic and practicing biodynamic, family-run estate in NE Italy, this is brand new to the United States. Fermented naturally with native yeasts and minimal sulfite additions, this is Pinot Grigio with bold, savory, and kind of funky aromas and flavors that we love.

This is not your typical Pinot Grigio! It will appeal to lovers of natural and/or orange wines, and it does see a bit of skin contact. The resulting wine kind of "walks on the wild side." Aromas and flavors of ripe apple, peach skin, musky herbs, and orange blossom lead to a rich yet lively palate. Enjoy with pho or other savory and umami dishes.

In 2005, Eric Poli sold his interest in the family’s 75-acre Vin de Corse estate, Domaine de Piana, to his brother Antoine. With the proceeds, he bought seven acres of old-vine Niellucio and Vermentino (aka Malvoisie de Corse) on the terraced Poggio d’Oletta in the heart of Patrimonio, the oldest and arguably best appellation on this mountainous Mediterranean island. An important factor in Eric’s decision was the fact that his wife, Marie-Brigitte, is the owner of Clos Teddi, the Patrimonio Domaine founded by her father in 1970.

Eric has also assumed responsibility for the winemaking of both domains, while Marie-Brigitte handles commercial affairs for the two companies. The brands are marketed separately outside of Corsica, but at home, the Polis share a popular retail tasting room in the heart of the picturesque harbor village of Saint-Florent where they showcase the wines of both Patrimonio domains. The boutique also features a full range of IGP Île de Beauté wines made from the 108 acres of vines Eric planted in 2007 near his hometown of Linguizzetta on the east coast of the island.

Protected by the maritime influences of the Golfe de Saint-Florent, vines cultivated on the limestone soils of Patrimonio’s hillsides rarely require treatments of any kind, so Eric’s practices are essentially organic (though without certification). Niellucio, genetically linked to Sangiovese, thrives in this ideally situated inlet at the north end of the island, and when yields are limited, results in wines with more freshness and finesse than those made from its Tuscan cousin. Corsica’s secondary red grape, Sciaccarellu, is the descendant of another Tuscan variety, Mammolo, which was likely introduced while the island was under the control of the Republic of Pisa (1077-1284). Primarily a blending grape for red wines, it can result in high-toned, floral, and fruity rosés on its own.Also, the fresh, aromatic whites made from Vermentino rival the best of Sardinia, Corsica’s neighbor to the south.

This wine is so aromatic you could put a dab behind your ears.  Wild wind-blown lavender, with dried strawberry, rosemary, and grapefruit; very juicy, ultra-fresh, and terrifyingly easy to drink ---- cool and racy and, did I say juicy? 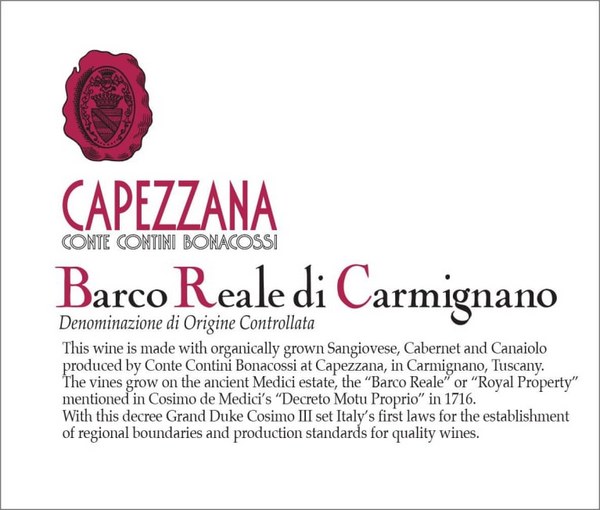 Did you know that Cabernet Sauvignon has been grown in Tuscany since the 18th century?  Carmignano is one of the lesser-known DOCG wines made in the famous Tuscany wine region of central Italy. The wine's origins can be traced back as far as the 14th Century, when, in 1369, a document was drawn up demonstrating that Carmignano was four times as expensive as any other wine of the time. In the early 1700s, the Grand Duke Cosimo III de Medici established the area of Carmignano as a nursery for grape varieties, which included the planting of internationally renowned Cabernet Sauvignon imported from France. He also issued a decree controlling the wine's production standards and sales, enforced by the Congregazione di Vigilanza.

Carmignano, the village from which the DOCG takes its name, lies 12 miles west of Firenze (aka Florence), on the eastern slopes of Monte Albano. It was one of Italy's earliest regulated wine names, long before the country's DOC/G system was introduced in the late 1960s. Despite this historical precedent, Carmignano wines were absorbed into the Chianti title (which was more prestigious at that time) and sold as Chianti Montalbano.

It was not until 1975, after much campaigning and determined action by several Carmignano vignerons, that Carmignano was granted its own independent DOC. The efforts were doubly repaid in October 1990 when the title was promoted to full DOCG status.

Carmignano wines are dry reds based on a standard modern Tuscan blend of Sangiovese (at least 50% of the final blend), Canaiolo Nero (up to 20%), Cabernet Sauvignon and Cabernet Franc (10–20% each). The wine is similar in style to its more famous cousin (and neighbor) Chianti, which may now also be made using a portion of Cabernet Sauvignon.

Carmignano wines are produced from vineyards in and around the villages of Poggio a Caiano and Carmignano. The terroir here is ideal for quality viticulture, and particularly for Sangiovese thanks to its lime-rich, free-draining soils, hot days, and cool nights. The delimited Carmignano viticultural area also produces Barco Reale di Carmignano, a more youthful version of the robust red Carmignano.

The region's largest winery is Tenuta di Capezzana, which accounts for over 70% of DOCG Carmignano produced. This historic wine estate can trace its wine production all the way back to 804, with the addition of Cabernet Sauvignon being made in the 16th century.

Barco Reale takes its name from the Medici property at nearby Artimino whose boundaries were defined by the ‘wall of the Barco Reale' (Royal Reserve) which ran for more than 30 Roman miles.

The Durante Family Estate is based in the Piave DOC in Northeastern Italy. This is a region more known for Prosecco, and the still wines rarely make it out of Italy.

Father Lino and his sons Ivano and Michele Durante pour their hearts and souls into their small family farm. Certified organic and practicing biodynamic since 1998, the trio believes that farming this way produces better wines.

Tank fermented in steel on native yeast, and aged in tank before bottling.  Look for red and black fruit notes of raspberry, blackberry, and red currant.  It’s big, bold, and deserves to be paired with grilled meats. 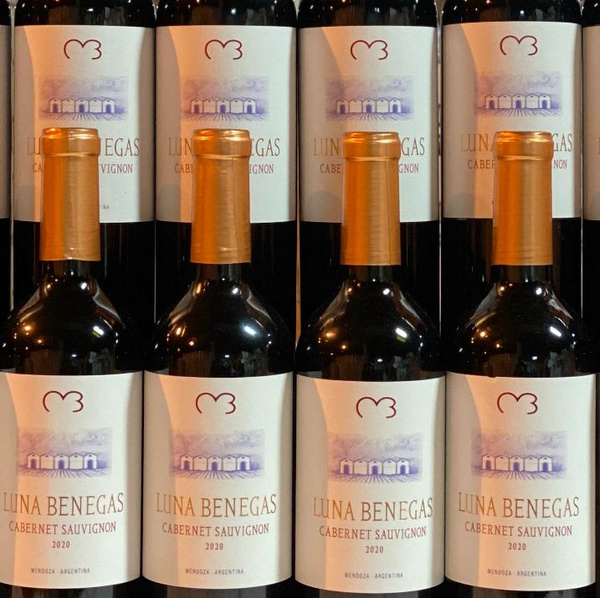 Tiburcio Benegas, together with Silvestre Ochagavía (Chile) and Agoston Harszthy (California), are considered the first three pioneers in the wine industry in America. Convinced that it was imperative to achieve excellence in their products, Benegas brought the first French grapevines ever introduced in Argentina, along with the most advanced technology available at the time

Pedro and Alberto Benegas continued with the family enterprise, following Tiburcio´s steps. Pedro, who had studied enology in Bordeaux, gave the rising industry a new boost at the beginning of the century. He stayed at his father´s and in Mendoza in charge of the vineyards and the winery, while Alberto, his brother, organized the administration and marketing of the wines throughout the country, from Buenos Aires. Thus, Benegas Hnos. was founded in 1908, starting a lineage that would last up to the present. After a trip to France, Pedro Benegas came back with a more comprehensive and modern view regarding the management of vineyards and quality winemaking. Until then, the Trapiche wines were made with some sophistication but fell short of the expectations aimed at by the Benegas. Pedro and Alberto decided to incorporate new brands for more demanding consumers, so they began to produce Fond de Cave, Broquel, Puente Viejo, and Vezelay. Pedro Benegas incorporated the typical features of the Bordeaux wines and the blends were definitely inspired by French tradition

Pedro Benegas died in 1943 and his nephew, Federico A. Benegas Lynch (1916-1997), who had joined the company in 1938, settled in "El Trapiche", Mendoza, to work in the winery. At the beginning of the 70's, the family company dissolved and the assets were sold. The Trapiche winery was demolished, and the vineyards were divided and sold. Pulenta bought the wine brands and Seagrams, the champagne brands. The only one that remained in the family was BENEGAS, owned at present by Federico J. Benegas Lynch.

Federico J. Benegas Lynch was born in the winery in 1951. He grew up by his father's side, sampling wines and working in the vineyard. This atmosphere awakened in him a deep love for his land and its wine. He had always been close to his father and eventually, he joined the enterprise, doing what he loved most with a solid conviction. In 1997, he became a member of the Board of Directors of Peñaflor and Trapiche wineries, which were then under the control of Luis A. Pulenta and DLJ. He resigned to his position in March 2001.

It was in 1998 that Federico J. resumed his activity as winemaker when he settled on the 40 hectares of Finca Libertad, part of the old Benegas' family property, where the vineyards are 20 to 80 years old. He started the production of quality wines, fully convinced that he would achieve the level of excellence of his ancestors. This restoration period is the landmark of the beginning of a new era in the Benegas family, who had always devoted to the art of vines from the very roots

100% Cabernet Sauvignon from younger parcels of Finca Libertad in Medoza, Argentina at 2800 feet above sea level. The vines for this wine were planted in 1966.  The grapes were concrete tank fermented on native yeast and then aged in oak for four to six months before bottling, resulting in a bright wine, full of red and black fruit, eucalyptus, and green olive notes.

90 points, James Suckling:  "Rich strawberries and blackcurrants with some green-olive and nori-like savoriness. Medium to full body and still crunchy, despite some sweet-and-sour character to the cherry fruit at the end. Tight and fine-grained."