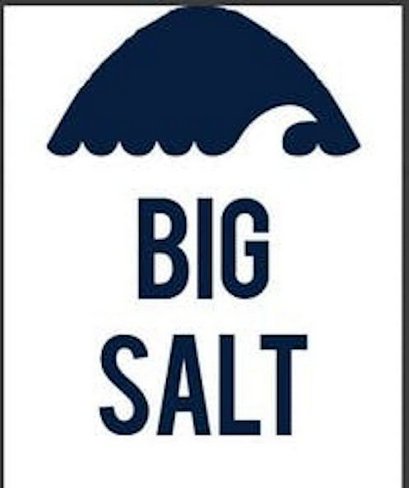 Founded by husband-and-wife duo John House and Ksenija Kostic in 2011,  Ovum is a celebration of the diverse expressions of Oregon Riesling. After years of learning the intricacies of the Willamette Valley while working together at Chehalem, John and Ksenija set off to further investigate the myriad terroirs of Oregon through the lens of Riesling, and now source fruit from through the state. They have found sites with blustery Pacific winds, extreme diurnal shifts, and rocky, well-draining soils.

To emphasize the idiosyncrasies of these vineyards, all of Ovum’s wines see the same practices in the cellar: natural fermentations, no additions or subtractions except for SO2, extended lees contact of 8-9 months – all in neutral barrels of acacia and oak, as well as Nomblot concrete eggs. The resulting wines are textured and concentrated, driven by minerality, and framed by unwavering acidity. Ovum’s work is among the most compelling white winemaking in the Pacific Northwest.

Big Salt is made from vineyards in the Elkton AVA, planted on Windygap soils (deep, well-drained residuum and colluvium from sandstone and siltstone) . The grapes blended here are 90% Gewurztraminer (planted in 1980) & Riesling (planted in 1983, native yeast co-fermented in stainless steel. Plus 8% Early Muscat (planted in 1978), native fermented in neutral barrel, 2% Melon, Savagnin Rose (planted in 1980), and Pinot Noir (all de-stemmed and added to the press). Made with no additives except low quantities of SO2, crossflow filtered and bottled after 6 months on lees.

Look for sea spray, spices, rich citrus and stone fruits in the nose and on the palate. In spite of the relatively low alcohol, the flavors are fully ripe, densely packed, intense and compelling. This is a terrific Oregon white at this price and full of personality. Serve with seafood, especially Thai and Japanese dishes, or with fresh, crunchy green veggies and salads, goat and sheep's milk cheeses, gingery accents, salumi dipped in orange ginger mustard and more....

Winery notes:  "Big Salt is a co-fermentation rather than a blend – meaning we allow mother nature to create complexity rather than attempting to blend the wine after the fact.  Starting in mid Sept, we pick Gewurz that is then soaked on the skins then pressed to tank.  As that juice begins to ferment, we incorporate Early Muscat, followed by Riesling, then an additional pick of Gewurz, followed by Pinot Blanc and Riesling.  Big Salt is the culmination of the myriad of climates Oregon vineyards have to offer in each vintage.

2021 Big Salt erupts from the glass with a mélange of citrus – bergamot, flamed lemon, sweet grapefruit.  Salty white tea aromatics are interlaced with pithy lemon before a waft of alyssum hits your senses.  Classic Big Salt on the palate – racy acidity combined with beeswax-y textures before finishing dry."

San Salvatore was founded in 1988 by Giuseppe Pagano. The estate is located in the middle of the Cilento National Park, near Paestum, in the Campania region of southern Italy. The area is known for its ancient Greek ruins, rich biodiversity, and over 2000 years of grape cultivation. Of the estate’s 250 acres, the majority is devoted to vegetable farming and woodlands. Vineyards comprise 60 acres and there are 25 acres of olive groves.

The estate is certified organic and uses biodynamic methods. The water buffalo that roam the property are the sole source of fertilizer used on the vines, along with milk for mozzarella production. Solar powers the winery.

La Capranera is Pagano’s passion project of producing low intervention, organic wine from Cilento’s indigenous grape varieties at an accessible price point. “La Capranera, translates to “black goat” in Italian, is named for the breed of goats – cilentana nera – that graze in the national park near where the grapes for these wines are grown. Once on the verge of becoming extinct, the goats have had a resurgence in population.” Philosophy: “Modern wines with a brilliant, easy-to-drink and strongly territorial bouquet that, like the name of the animal, they are in their ease in every situation.”

Responding to Campania's recent wine renaissance, La Capranera focuses on organic wines from indigenous grape varieties priced modestly enough that the greatest percentage of wine enthusiasts can experience these ancient varieties and the character of this place. The vines are sustainably farmed with organic methods, and the resulting wines offer a pronounced youthful vibrancy that sets them apart.

From vineyards with clay and chalk soils in Campania's Capaccio-Paestum area in the middle of the Cilento National Park. Widely considered indigenous to Campania, Fiano is known for low yields and intense aromatics; some believe ancient Rome's Apianum was created from Fiano. Fermented in stainless at low, controlled temperatures and then aged 8 months in tank. elegant bouquet, bright and very clean on the palate, white flowers, and pear with mineral notes 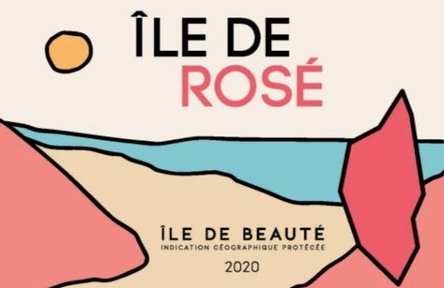 Corsica is where all the cool kids are going for tip-top level rose these days, and one sip will tell you why. There’s a purity, focus and coolness in these wines that take rosé to the next level. Corsican rosé wines are bright and crisp with a great fruit core.

Corsica, of course, is located in the Mediterranean Sea between the southeastern coast of Provence and the western coast of Tuscany. Although the island is closer to Italy, it has been under French rule since 1764 and therefore, is considered a French appellation.

This organic beauty is 60% Sciacarello (aka Mammolo), an indigenous grape that produces killer rosé wines, and 40% Nieluuci.(Sangiovese).   Made by an organic co-op of farmers committed to producing high quality wines.

Île de Rosé sings with purity, sea-saltiness, minerals and ripe red fruits with hints of candied orange zest. Terrifically exuberant acidity is key with a great wine like this and it’s all here!

Cattin is the largest family-owned and family-operated winery in Alsace and located in Voegtlinshoffen, a small village on the foothills of the Vosges Mountains at 1,091 feet in elevation. The Cattin family has been producing wine since 1720 and today the winery is managed by the 12th generation! The estate is composed of many small plots located in the Southern part of the Colmar region and a staggering 80% of their vineyard land is located on slopes.

A broad menu of soils (clay, limestone, sandstone, ferruginous, marl…), combined with big time diurnal shifts, means an exceptional palate of aromas and flavors. Cattin uses old oak “foudres” (big barrels) to produce some of the region’s most terroir-driven Grand Cru wines such as the legendary Hatschbourg which ranks among the family’s oldest plots.

A superb value Pinot Noir without losing the quality. This light red wine has a nose of red fruits, strawberry, and cherry with a floral balance. A light, clean, smooth taste and is very pleasant on the palate. Crisp, crunchy, tart red berry plays subtly on the nose. The light palate is very pure in a traditional Alsace Pinot Noir fashion. The finish is dry, fresh, and soft.   Pairs best with light dishes.   In Alsace, it is often served with the tarte flambée (the Alsatian pizza composed of crème, cheese, and bacon). Served chilled as they do in the Alsace, or at room temp. 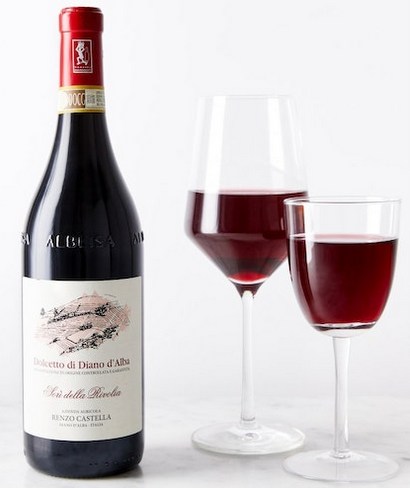 This wine is a "darling" of the sommelier community and for good reason: Nebbiolo/Dolcetto master Renzo Castella's decades-old, pesticide/herbicide-free vineyards hug the borderline between Diano D'alba (one of Italy's only Grand Cru-equivalent sites for Dolcetto) and Barolo (one of Italy's most prestigious wine-growing villages, period). The result is a seductive, dark fruit/floral-scented red with a low price that defies the impressive depth and complexity.

Renzo Castella farms a small vineyard that hugs the border between Serralunga d’Alba and Diano d’Alba. This location is ideally situated to grow both Nebbiolo and Dolcetto, which is exactly what Castella does. Serralunga d’Alba is one of the most famous of Barolo’s comunes, making it part of the center of the Nebbiolo universe.

Diano d’Alba, meanwhile, is one of only seven villages to be granted DOCG status for Dolcetto, Italy’s highest and most esteemed viticultural designation.

While both of these grapes flourish in this part of Piedmont, they behave very differently. Nebbiolo is finicky and hard to ripen but can produce wines of great structure and near-infinite longevity. Dolcetto, on the other hand, is quicker to ripen and lower in acid and tannin, resulting in wines that are delicious from day one and intended to be enjoyed young.

Castella’s Dolcetto is a superb example of what the grape can be achieved when farmed with care - Castella uses neither pesticides nor herbicides in his vineyards - and vinified using traditional methods. This wine possesses great purity of fruit and delicate floral undertones while retaining just a touch of Italian rusticity. It is the perfect thing to accompany a weeknight meal of pasta and pizza, casual and delicious in equal measure.

The finished wine is a magical bottle at a more than reasonable price. With loads of dark fruits, violet, and an overall seductive personality, it should cost twice the price 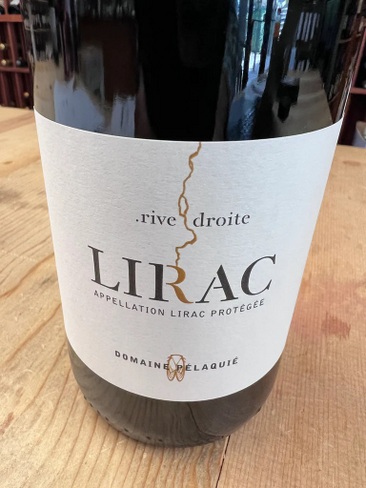 Domaine Pélaquié is a family-run estate with a long history; the estate has been passed down father to son for generations, cultivating the same land all the way back to the 16th century! The current son in charge, Luc Pélaquié, has modernized the winery, all the while protecting the traditions of his ancestors. He practices sustainable viticulture, certified by HVE, on his 250 acres of vines located in the Côtes-du-Rhône, Laudun, Tavel, and Lirac.

Lirac (pronounce it LEE rock) is in the Southern Rhône and sits west of the Rhône River. Wine grapes have been grown here since the middle ages. While they make reds, whites and rosé in the region, you will primarily find red wines made here (87%).

Lirac is the southernmost cru within the Rhône and has been an appellation since 1947. They have some of the most stringent specifications in the region. The area sits in the Gard department and is out of the way from the traffic in the Rhône Valley. Off the beaten path, and across the river from Châteauneuf-du-Pape, it has remained out of the spotlight in the Rhone and a bit of a secret.

Lirac’s 1,700 acres of vineyard are essentially the other half of Chateauneuf du Pape. Lirac sits on the West bank of the Rhone River, opposite Chateauneuf.

The climate and subsoil are essentially identical to Chateauneuf, and – like Chateauneuf – most of the vineyards are covered in large, rounded stones called “galets” left behind by the Rhone when it filled the entire valley in ancient times.  When the Papacy arrived in Avignon in the early 1300s and began searching out sources of wine for communion and celebration, Lirac was quickly identified as the source of the very finest wine in the region. We know that Pope Innocent IV paid a premium for the 20 casks of Lirac he purchased in 1357.

90% Grenache, 30% Mourvedre.  Sustainably farmed.  90 points, Parker:  "The medium to full-bodied 2017 Lirac starts with scents of black olive, but then those blend easily into red fruit flavors on the palate. Most impressive is the rich,velvety texture, which lingers elegantly through the long finish."