“Hinter der Mauer” is an Austrian-German term that Graham Tatomer learned while working harvest in Austria at Emmerich Knoll which roughly translates to “your back against the wall”.  The room between the walls of the terraces of the vineyard and the vines he would work on was very tight and this feeling of having your back against the wall is something very familiar during the COVID-19 pandemic, when Graham decided to blend some of his more expensive wines that were not selling because much of his customer base was the restaurant trade and they were all shut down.  He created Hinter as a way to sell his wine at a much lower profit to retail customers, and the wine sold out very quickly.

This wine is an homage to his time in Austria working these vineyards and is expressed through these diverse sites throughout the Central Coast of California. There is a sense of being squished. But it often produces some of the best tasting fruit due to the radiant heat from the stone wall next to it. Graham learned this term one jovial evening with the Knoll family, when they were all sitting around the table enjoying wines and they were teaching him some Austrian dialect terms that they were both proud of and entertained by. Hinter der Mauer is not only Austrian but distinctly a “Loiben Village” term. It would not even have the same meaning in other areas of the Wachau

There is no variety listed on the front label, just that name, 2021 Central Coast, California. On the back label the blend is listed as 80% Grüner Veltliner 20% Dry Riesling. The vineyards in this cuvée are Kick-on Ranch, John Sebastiano, Paragon, Oliver’s, and La Estancia.

An SF Chronicle Wine of The Week in 2021

The eastern French region of the Savoie is one of the most exciting wine regions on the planet, and it's near the top of my must-see places to go.   Savoie is blessed - a cool mountain climate on a warming planet, and about as idyllic a place to grow and make wine as one could ask for.

Known more for skiing and other outdoor pursuits, the Savoie is not so well known as a wine-producing area, though within the area known as the Combe de Savoie, there are a handful of the best producers.

With little-known grape varieties such as Jacquère, Mondeuse, and Altesse nestling alongside Pinot Noir, Chardonnay, and Gamay, the world of Savoie wines begs to be explored. I was astonished at the quality of Jean Vullien’s wines, especially when compared to most other producers in the area. How were they producing such high-quality, clean, and fresh wines when so many others clearly couldn’t? It transpired that Jean Vullien learned viticulture in his native Bordeaux and his two sons, David and Olivier graduated from the renowned wine college, La Viti in Beaune.

The domain’s holdings include all of the region’s indigenous grape varieties, as well as strategically-placed parcels of Chardonnay and Pinot Noir. The wines range from a crisp, lemon and mineral Jacquère-based white that British wine author Andrew Jefford would categorize as “Muscadet of the Alps” to complex floral and spiced reds made from Mondeuse. In recent years, David and Olivier have also earned a reputation for their excellent Méthode Traditionelle sparkling wines.

Though the Vulliens have been making wine for 40 years, the family is perhaps best known as a leader in another segment of the wine industry. Since 1890, Vullien Pépinière Viticole (vine nursery) has been supplying young vines to growers throughout France. In fact, they were the source for about 25% of the Chardonnay planted in Chablis after the ravages of phylloxera.

Climatically, the Savoie is more challenged than many other wine-producing areas of France, hence the different native grape varieties. Jacquère, which is widely available, drinks like a dry Sauvignon Blanc and is superb with shellfish and seafood. Gamay, which is the principal variety of Beaujolais, is comfortable in this slightly cooler climate too. They are succulent, light and full of fruit with the Gamay Rose airing more on the side of a dry rose. Both work extremely well with Savioe dishes such as raclette, tartiflette, tarte flambée (flammekueche), and cheese fondues.

Jacquère is a variety of white grape found primarily in the Savoy wine region of France. It is a high-yielding vine variety that is used to produce lightly scented, refreshing and gently aromatic dry white wine, such as Vin de Savoie. Jacquère is the grape used in Apremont wines and is the usual wine paired with cheese fondue (a dish from the same region).  Vullien's 100% Jacquère is grown on soils of dark Jurassic limestone and black marl with a pebbly topsoil layer of scree. The wine is fermented in stainless steel tanks and the malolactic fermentation is blocked. The resultant wine is light, mineral and brightly acidic with notes of alpine flowers and citrus. Enjoy as an apéritif or with fondue or mountain cheeses.

Vignerons de Grimaud is a co-op founded in 1932 by over 100 family-owned vignerons (winegrowers). It is situated near the gulf of Saint-Tropez and the heart of Provence. Today, the cellar now has more than 270 members spread over 12 municipalities.

Mainly planted with Grenache, Syrah, Cinsault, and Rolle (Vermentino), the vineyard producing this wine is located on the slopes perched at 500 feet in altitude, where it benefits from unparalleled sun exposure and the maritime winds blowing in from the Mediterranean Sea just a few kilometers away. Each varietal was planted on the most suitable parcel, allowing it to flourish and mature fully. The terroir is predominantly sandy-schist and limestone which allows the roots to grow very deep, making the vines more drought-resistant and contributing to the complexity of aromas and overall finesse of the finished wine.

This rosé blend is roughly 50% Grenache and 50% Cinsault. The grapes went direct to press with minimal skin contact, leading to the pale salmon color. The must was cold-fermented to preserve the aromatic freshness, and was matured in stainless steel.

Pale pink. Delicate aromas of strawberry and raspberry open to flavors of cherry, Jolly Rancher, alpine strawberry, and wet stone, and close with a wonderful burst of refreshing acidity on the finish. In true Provence style, this rosé is crisp, refreshing, and dry. It might even succeed in transporting you to St. Tropez.

This 100% Cabernet Sauvignon wine comes from the eastern ends of the Entre-deux-Mers appellation (which is designated for whites only, thus the generic "Bordeaux" label). It is full of black fruits that balance the firm, dry tannins. Juicy acidity bursts in at the finish.

Winner of a gold medal from the Concours Générale Agricole de Paris.

Réserve Grand Marchand belongs to the Barthez Family. Jean-Marc Barthez, his wife Eliane, and their children are working at the property and in their vineyard with the care and experience of old-generation vine growers. 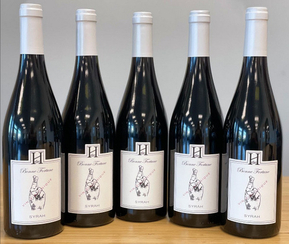 Quentin Heller’s lives in the Rhone Valley, where his extensive network influenced him to create his own wines. Grapes are sourced from unique, old vine sites in the Rhone and elsewhere, and vilified with minimal
intervention.  He is a passionate, enthusiastic, entrepreneur full of ideas. Working alongside small winegrowers in the Rhône Valley and Beaujolais for years, he got caught up in the winemaking game, and launched his own brand in 2020. The Heller brand is an artistic outlet and a space of total freedom which does not only consist in putting a name to a bottle.

90 points, James Suckling:  "Delicious seems to me to be the word here! Big, with plenty of blackberry and a lot of freshness, this bold red is brimming with ripe but not overripe fruit. Very clean and straight. A blend of 2020 (80%) and 2021 (20%) vintages. 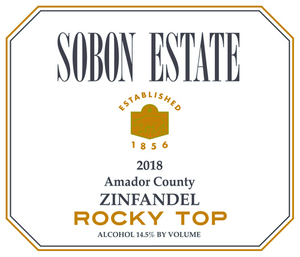 Sobon Zinfandel Rocky Top is made by the Sobon family in Amador County.  The winery was founded when the Sobon's purchased the old d'Agostini (designated a State Historic Landmark) and started producing deep-structured wines using sustainable and organic farming methods.

We've carried Rocky Top for fifteen or so years, and really like its bold flavors and brambly fruit.  Produced entirely from Sobon's organically farmed estate old vine vineyards in the Shenandoah Valley, these special vines yield intensely concentrated Zin full of ripe blackberry and cherry fruit aromas and flavors, with hints of chocolate and that classic Amador spiciness. It is a perfect match for roasts, steak, and rich sauces, and will complement aged, full-flavored cheeses.

From one of the few remaining blocks of pre-prohibition era Zinfandel on the Estate, this ridge-top vineyard of cobble loam gives us a full-bodied wine of great depth, structure, and character. From dry-farmed sustainably grown vines, offering inviting notes of summer berries, licorice, and a woodsy earthiness with hints of white pepper and allspice. Heady aromatics lead to a rich, long, lingering finish.

The Sobon Estate winery started in 1989 when Leon and Shirley Sobon bought each other a second winery for their 30th wedding anniversary present. They purchased the historic D’Agostini Winery, one of the oldest in the state. This winery has been designated as California State Historic Landmark #762. This site was chosen not only for its historical winery but also for its vineyards and vineyard land.

The old vine Zinfandel was retained, and the other vineyards were replanted with the best varieties and clones. The Sobon Estate label launched the estate line of wines for the Sobon Family — the best wines from their own grapes. Over the years, Leon garnered many National and International awards for Sobon Estate and Shenandoah Vineyards wines. Both family label wines are distributed nationally, as well as internationally in Canada, Switzerland, and Hong Kong. Leon is widely recognized as a leader in the wine industry and has actively participated in many industry boards and committees. He is also sought after as a judge for many prestigious wine-tasting competitions. Today … the winemaking and business aspects continue to be a family affair. Shirley is the Finance & Gallery Manager while Leon contributes his years of winemaking knowledge to every vintage. Sons Paul, Robert, and Son-in-Law Tom Quinn continue the family tradition that began all those years ago.

91% Zinfandel, 9% Carignan.  "Full aromas of ripe black fruit, cooked cherry, and hints of toasty smoke. Round and full on the palate, with blackberry, plum and cinnamon, over a peppery spice.  Balanced, rich finish ending on a dark chocolate note."- Sante Magazine