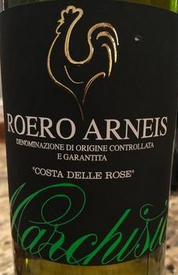 Sergio Marchisio is a quiet pioneer: He was the first-ever farmer to plant Arneis in Castellinaldo, the first to make méthode Champenopise sparkling Arneis, and the first in the region to use amphorae for Nebbiolo.

The Marchisio family farms vines (always organically) in many of the area’s top sites – including Nebbiolo from the famously sandy slopes Valmaggiore. Sergio’s two sons, Fabio (winemaker) and Ivo (agronomist) round out the team.

Aromas recalling beeswax, hazelnut, and wild herbs form the nose along with a whiff of petrol. On the dry, restrained palate, honeyed notes accompany dried apricot and Meyer lemon before a bitter almond close. Fresh acidity keeps it lifted.  All the youthful richness of a great natural, authentic Arneis, capable of directly recounting the marine origin in the Roero. The wines are bright, vibrant, and always bursting with aromas.

Try it with roasted fish, spicy pasta sauces, cream sauces and poultry.   For an interesting experience, open the bottle and have a glass; recork it and put it in the fridge, have another taste; repeat.  For me the wine is transformed from an angular Sauvignon Blanc-like experience to a more rounded Chenin-like one 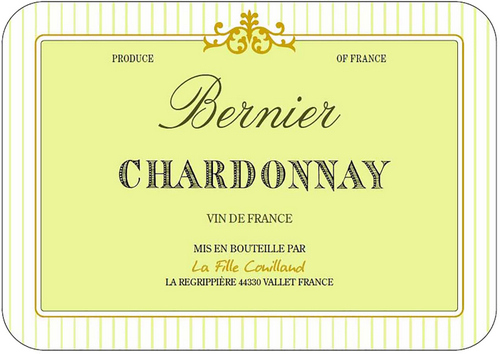 We've been carrying Bernier Chardonnay since we opened the shops in 2002.  It offers great value, is varietally correct and could pass for an entry level White Burgundy at a fraction of the cost.

Of all the wines produced in France’s vast Loire Valley, Chardonnay is probably the least celebrated. Sauvignon Blanc, Chenin Blanc, Muscadet, Cabernet Franc, and even Malbec and Pinot Noir have justifiably deserved reputations there. But Chardonnay? It’s a minor player at best.

And yet, this is an oversight. There is more-than-decent Loire Valley Chardonnay to be found and enjoyed. In the far eastern end of the Loire, the variety figures in the relatively obscure but often delicious wines from the small Cheverny appellation, where it is blended with Sauvignon Blanc to produce crisp and elegant wines.

A hundred miles or so to the west, on the other side of the Loire not far from the Atlantic Ocean, Chardonnay is grown and bottled on its own in the Muscadet region. One producer doing this successfully is Couillaud Brothers, as this 2018 Domaine de Bernier Chardonnay amply demonstrates.

In 1978, just after purchasing Château de la Ragotière, the Couillaud brothers also purchased an estate on a beautiful hillside in the Loire Valley with a schist terroir. Part of the plot still needed to be planted, and Bernard Couillaud was curious about which varietals would do well in this area, where the two dominant varietals were Melon de Bourgogne and La Folle Blanche. After some research, the Chardonnay grape piqued his interest due to its unexplored potential in a maritime region. He launched the project and immediately set out for Chablis to research and learn more about Chardonnay. Planting started in the spring of 1987 and, over the course of three years, 42 acres were planted on the hillside plot.

Soon after the project began, Danny Haas of Vineyard Brands became interested and wished to taste the final product. In 1990, after having tasted Bernier Chardonnay amongst several other wines from the brothers, he was convinced of its potential and Bernier was introduced to the market.

Domaine de Bernier Chardonnay is made with 100% Chardonnay grapes in the Western Loire Valley, Aged on the less to add weight and texture, it is also refreshing and crisp. Made in an unoaked style, it is delicious with lobster, fish, curry, and hard cheeses. 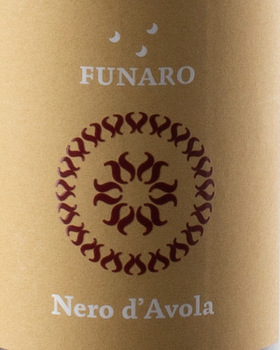 Funaro is a family-owned organic winery in Santa Ninfa in the Trapani province on the Italian island of Sicily (‘Sicilia’). The estate was founded in 2003 when the Funaro siblings - Tiziana, Clemente, and Giacomo -  decided to make wine from vineyards that had been in their family for three generations. Wines are made under the Terre Siciliane IGT.

They farm 85 acres of which 60 acres are vineyards (on two sites–see below) and 15 acres are olives, plus arable land, vegetable plots, and fruit orchards.

The Funaro enterprise consists of two farm estates in Western Sicily, not far from the coastal towns of Marsala and Trapani.

In addition to building an eco-friendly winery facility complete with solar electricity and a natural wastewater recycling system, they obtained organic certification for their vineyards, olive groves, and orchards in 2011.

As the Funaro family demonstrates with this organically farmed, unoaked 2019, Nero d’Avola has many different shades. Most Sicilian wine lovers have been conditioned to think of Nero d’Avola wines as dark, dense, and well-oaked, but here we have something different—a new-generation take on the grape that prioritizes freshness and easy drinkability over showy intensity.

Hand-harvested, and macerated on the skins for about ten days, after which they are placed in steel tanks for fermentation.  The wine rests for several months and is then bottled.  Intense ruby red in color, with purple hues. It has a fruity bouquet with hints of red berries (cherries, blackberries). It has a rich flavor, with the typical acidity of Nero d’Avola, with a long finish. 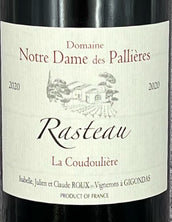 Domaine Notre Dame des Pallières is a very old family estate, whose name comes from a place of pilgrimage visited by the Provençal people in the middle ages who believed that the fountain on the property would protect them from the plague.

Claude Roux and his cousin Jean-Pierre have so many generations of Gigondas wine-making experience in their family that they don’t know exactly how many of their relatives have been involved up to now – Antique writings suggest that this Domain existed in the 900’s.  Fortunately, this tradition is continuing with Claude’s children, Isabelle and Julien, gradually taking over the day to day responsibilities of farming, production, and administration.

When asked about their methods, they smile and explain that they are simply following the traditional methods of the family members that came before them.

"Coudouliere" - This zone is unique in that it is a spot where grey clay (deposits of plants and algae from 3-6 million years ago) and brown clay (river deposits) intersect at the root level, meaning more complexity than you see in most other spots in the Southern Rhone. With 1,000 feet of altitude, there is also a terrific freshness to wine grown from this site. Elevage is traditional,  taking place in neutral barrels. Alcohol comes in at a very reasonable 14% - A welcome contrast to the 15%-16%+ we are seeing in this category nowadays.

Cassis and blackberry flavors are ripe but mouthwatering in this full-bodied red. A Grenache-dominant blend augmented by smaller proportions of Mourvèdre, Syrah, and Cinsault, it's buoyantly fruity but maintains a twist of herbal freshness.

The cooperative winery Bodegas San Valero (BSV) was formed in 1944 by 60 local winegrowers. Today it covers almost half of the 1,500 growers associated with co-ops in D.O.P. Cariñena. San Valero manages 700 grape growers cultivating over 8,600 acres of vineyard as active members of the cooperative. 100% of the vineyards surround the winery facility near the village of Cariñena (with many qualifying for a single vineyard designation); the region’s day-to-night temperature variations, high winds, and notable elevation all support consistent ripening with minimal treatments.

Through them, BSV has brought the area’s traditional tastes into the 21st century, protected and restored rather than retouched. The mission of director Domeque Sanz is to safeguard the denomination’s heritage.

During his 37 years making wine for BSV, Domeque Sanz has seen large shifts in technology from temperature control to recent work replacing pesticides with pest-controlling techniques such as pheromone-based sexual confusion. The winery works with decades-old vines to increase both the quality and quantity of the region’s historically powerful, structured wines. Locally they are known as el vino de las piedras (the wine of the stones) and have impressed European drinkers in the know for centuries, counting philosophers like Voltaire and Spanish kings like Philip II and Alfonso XIII among their historical fans. While international varieties like Chardonnay and Cabernet Franc have found a home here, innovation has been concentrated on improving traditional approaches and fixing past problems of less than optimum ripeness at harvest time and spoilage in the final product: “The profiles of the most classic wines are already well defined,” says Domeque Sanz. “Many have now been rejuvenated by our ability to use technological advances.”

93 points, James Suckling:  "This is rather inky with dark berries and graphite to the black cherry aromas and flavors. Medium-bodied with firm tannins and a long textural finish that goes on for minutes.

92 points, International Wine Report:  "The 2019 'Plano Alto' is fresh and inviting, as it opens to aromatics of black raspberries, wild cherries, pomegranate, sweet spices, and fresh flowers which all jump from the glass. On the palate, this is vibrant with fresh red berries, florals, and spices. This is accessible today, but should continue to develop nicely over the next 2-3 years." 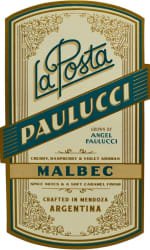 Argentina’s best small-family growers express their individual passions with single-grower, single-vineyard wines. Each wine named after a grower family demonstrates the wide range of Malbec aroma and flavor profiles generated by distinct Mendoza appellations. La Posta translates to “the tavern,” where the farmers meet to discuss their soils, their vines, their quest for superior flavors, and their passions for life.
In collaboration with wine pioneer Laura Catena and esteemed winemaker Luis Reginato, the hard work and skill of the people behind the wines are expressed in La Posta. All La Posta wines are certified sustainable through Bodegas de Argentina.
This single vineyard Malbec is sourced from the region of Ugarteche located in the sub-appellation of Lujan de Cuyo, where soils are a mix of sandy loam, sand, clay, and silt. 50% is aged in
French oak barrels, 15% new barrel, 35% in 2nd and 3rd use barrels and 50% Stainless steel tanks.
Aromas of red cherries, raspberries, and violets along with notes of toasty oak. On the palate, fresh berries with spice and a hint of soft caramel on the finish. It goes great with everything from meats, to pasta, to mild cheeses. Unique recipe ideas include: Lamb burger with Manchego and Smoked Paprika, or Caramelized Onion and Butternut Squash Tart.
91 James Suckling:  Plum, blueberry and wet-stone aromas. Full-bodied with soft tannins. Juicy and fruity on the palate with a flavorful finish.
90 Robert Parker's Wine Advocate The floral 2020 Paulucci Malbec matured for 12 months before being bottled. It shows the textbook Malbec notes of red and black berries and violets. The palate is juicy, with fleshy fruit and fine tannins.
Category: Bargain