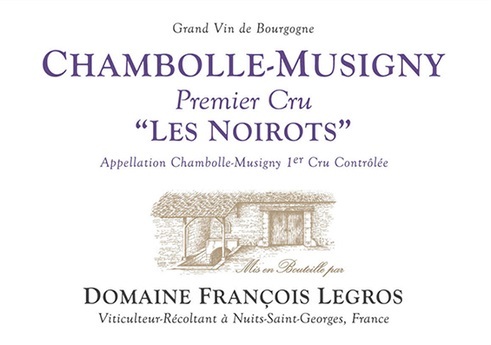 François Legros took over his family's Nuits-Saint-Georges domain in 1988 and since then has dedicated himself to becoming among the best in his appellation (which happens to be one filled with greats). Like many of the current generation at the helm of older family domains, he has moved toward a more natural philosophy of work in the vineyard, practicing lutte raisonée and performing his work in the chai in a more traditional, less involved manner.

He has also helped grow the domain's holdings in Nuits-Saint-Georges (by rehabilitating some old vines that belonged to his parents) and other nearby appellations (taking over, for example, a small parcel owned by his father-in-law in St. Aubin). Thus he has gradually expanded the vineyard holdings, which today still only total a scant 20 acres. His Beaune-trained daughter Charlotte has also joined him at the domain, and the delightful father-daughter team together make around 35,000 bottles a year of Bourgogne Blanc and Rouge, along with Nuits-Saint-Georges, Saint Romain, Morey-Saint-Denis and Chambolle Musigny, among others.

​Legros harvests his grapes 100% by hand, and then the expert sorters step in and do their work right there in the vineyard, to choose only the best fruit and leave the rest behind. Next, at least 90% of the grapes are destemmed in the winery and fermented in concrete vats. Following a 2-week fermentation with manual pigeage, the wine is transferred into a combination of new and used oak for 12-18 months, depending on the barrel. Wines are then bottled unfined and unfiltered.

In addition to having some excellent premier crus in Morey-Saint-Denis and his hometown, he also has three-quarters of an acre in the northern part of Chambolle Musigny with lots of limestone in the soils. It shows notes of strawberry and raspberry, along with some smoky vanilla and spice. An excellent companion to lamb chops or lean steaks.