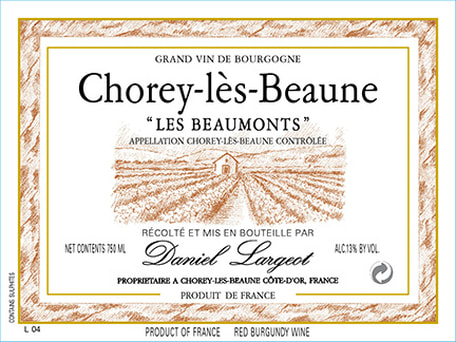 Daniel Largeot was a well-respected Chorey-les-Beaune winemaker whose deep, traditional red wines were much appreciated by a mostly local clientele. He started bottling his own wine in 1965 and was later joined by his daughter Marie-France, who completed her wine studies in Beaune in 2000. She was joined by her husband Rémy Martin (that really is his name) in 2002. Coincidentally, Rémy was a classmate of Vincent Charleux of the Maranges domaine Maurice Charleux.

Daniel Largeot passed away in 2008, but his daughter and son-in-law continue to work his 30+ acres spread over five appellations, with Marie-France in charge of vinification and Rémy in charge of the vines. Their philosophy (basically, that wine is made in the vineyard) is explained simply: “We invest tremendous time and effort between the vines,” says Rémy, “because when the grapes are not at their best, they are difficult to improve in the winery.”

In the vineyards, grass is allowed to cover the soils until spring when it is plowed several times to develop healthy activity underground. Shoots are pruned short, sometimes fruit is dropped and leaves are plucked. Harvest is by hand with sorting both in the vineyard and when the fruit arrives at the winery. The grapes are usually destemmed although, depending on the vintage and wine, some grapes might be vinified whole cluster. After a cold maceration to extract fruit and color, traditional fermentation takes place with punching down and pumping over to extract the raw material. Aging takes place in their underground cellars in 225-liter oak casks, some of which are new while the others have seen between one and four wines.

This is a wonderful domain for Burgundy fans looking for overachieving wines from unheralded appellations. They are an excellent old-school producer, without relying on the trappings of sexy new oak but rather displaying deep red fruit and a subtle hint of earthiness that only adds to the wine’s appeal. In short, another domain whose wines overdeliver for their price.
This lieu-dit is located on the opposite side of the highway from Chorey village, between Aloxe- Corton, and Savigny-les-Beaune, and covers one-third of the Chorey-les-Beaune appellation. The Largeots farm 2 hectares here. Black cherry and cassis notes on the nose, along with a touch of fig and kirsch, with hints of vanilla, smoke, and minerals that arrive on the medium to full-bodied, elegant palate.
Category: Old World Pinot Noir (Burgundy, etc)