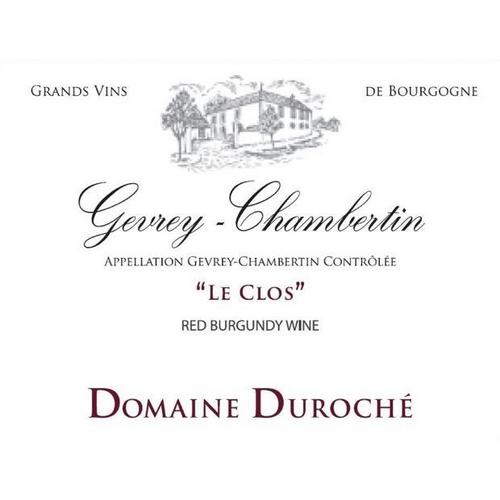 "Blessed with an enviable patrimony of vineyard holdings and plenty of old vines too...The ensuing wines are beautifully fragrant, with filigree tannins, vibrant fruit tones and sneaky persistence.  In short, Domaine Duroché continues its ascent, and readers who haven't yet taken notice should do so before it's too late." - William Kelly, Robert Parker's Wine Advocate

The wines of Duroché are models for the transparency and fine tannins that Gevrey is capable of, with the inherent structure and dark earth signature synonymous with the village. Duroché's wines have a hallmark featherweight texture and lacy minerality that persist in the most impressive way. It's this harmony between the reflection of place and a lifted, graceful sensibility that stands out immediately when you taste.

The Premier and Grand Crus from Duroché are exhilarating but very rare. In the domain's lineup, it's the Gevrey Chambertin lieu-dit that can not be overlooked. Le Clos is a minuscule parcel of less than half a hectare. The grapes are 100% de-stemmed and raised in 15-20% maximum new oak, without fining or filtering prior to bottling. Le Clos is a benchmark villages level bottling that calls to mind the iconic, yet understated examples from Mugnier and D'Angerville.

Pierre's home village is often characterized by its dark earth notes and the most formidable structure of the Côte de Nuits appellations. Often this leads winemakers to implement more new oak and push for maximum extraction and flash. Pierre takes his cues from an entirely different playbook.

Duroché’s style of wine is very much in the mold of, say, Charles Lachaux in Vosne-Romanée or Romain Taupenot in Morey-Saint-Denis. These are not wines stuffed to the rafters with sweet fruit; instead, they prioritize fine tannins, mineralité, transparency and focus. They are intense in their own way, perhaps as intellectually satisfying as satiating the senses, and they clearly express their terroirs this year. Tasting through the range was like a guided tour of the Gevrey’s climats.

One crucial point to make is that Pierre Duroché bottled in November 2018, earlier than many of his peers, in order to capture their freshness. I wonder whether a second winter would have imparted more weight, as some fellow winemakers suggest.

Whether you're a seasoned Burgundy collector or just interested in finding the most (relatively) under-the-radar superstars of the region, Pierre Duroché's 2017's are not to be missed!

The Le Clos vineyard is a tiny site - under an acre, planted in 1998.  It offers a classic expression of Gevrey’s earthy minerality, power, and detail. There's drive, concentration and shocking finesse.

90-91 Robert Parker's Wine Advocate:  "Aromas of raspberries and cherries mingle with nuances of grilled meat and licorice, introducing the 2017 Gevrey-Chambertin Le Clos, a medium to full-bodied wine that-despite the comparatively young vine age-is one of the deeper, more concentrated village cuvées in the cellar, framed by velvety tannins."