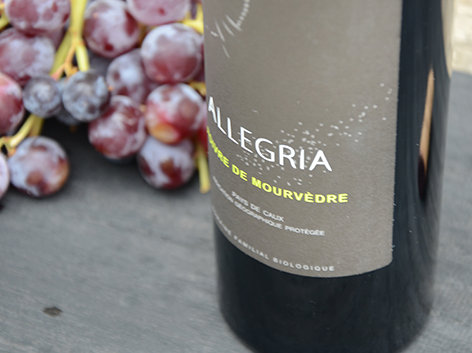 Located at the base of a dormant volcano between Montpellier and Béziers in the Languedoc-Rouissillon region, Domain Allegria is a Franco-Argentine project with famed oenologist Roberto de la Mora (Cheval des Andes) making the wines from grapes grown by the d'Aboville family's organic wine farm.

Eight years ago Ghislain and Delphine d’Abocille found paradise on the southern slope of Les Baumes, an extinct volcano overlooking the Haut Languedoc town of Pezenas. This windy site called out to them as ideally suited to the production of interesting wines and more importantly as a rural location perfect for raising their tight-knit family of seven. The couple partnered with friend and mentor Roberto de la Mota when purchasing the property, and Roberto continues to lend his wisdom with each vintage.

This is one of only three locations in France with a high concentration of basalt soil, the other two being the Grand Cru of Rangen in Alsace and Clermont Ferrand in Auvergne. The second primary component of the soil here is quartz river rock, a soil type made famous in Chateauneuf-du-Pape. The quartz here comes from the same source as that in Chateauneuf, but is jagged rather than rounded due to it not having traveled as far. One will find that the quartz here is also present much deeper, continuing underground for hundreds of feet and thus lending a searing minerality to wines grown here.

In total the property is comprised of 23 acres and divided into four vineyard blocks. Each vineyard block is used for one specific wine the family produces. All vines are certified organic and this was the region’s first winery principled on ecological design and process. SO2 additions are extremely limited (under 20mg/L).

Grapes are fermented in unlined concrete vessels that were custom designed to accommodate manual pigeage/punch downs, which still eight years in is a favorite after-school activity for all of their kids (they strap the kids into climbing harnesses that are roped to a bar overhead and let them go wild).

Sourced from low-yielding, 40-year-old Mourvedre vines that sit on the western edge of the property. Named for the peppery notes from this varietal that emerge when one keeps skins in contact with the wine for a longer period of time. Aged in mostly used, tight grain Eastern European barrels to bring aromatic complexity without adding overwhelming oak flavors.