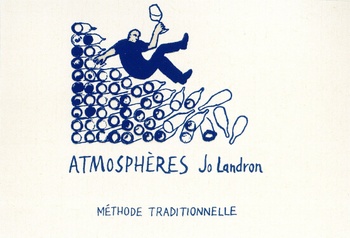 "Jo Landron remains one of his region's most conspicuous over-achievers, and his name (or that of one of the domains with which he is affiliated) on the label is a virtual guarantor of fine quality.” David Schildknecht

Jo Landron is a man whose modesty is only matched by his mustache. Reticent to accept praise for his expressive Muscadets, he credits the diversity of the domaine’s terroirs, situated on the upper slopes of the Sèvre River near Nantes. Since 1990, after taking the reins from his father, Jo has expanded the family holdings from 26 to 50 hectares of vineyards. His approach to viticulture is the result of an ongoing philosophical journey, which began in 1999 with the labor-intensive commitment of organic conversion, eventually earning certification from EcoCert in 2002. By 2005, with the guidance of consultant Pierre Masson, Jo and his team began implementing biodynamic practices and became certified in 2011. Over time, the treatments applied to the vines clearly contributed to an increased balance and liveliness in the wines. A strong awakening occurred; the Muscadets became not only an expression of grape and soil, but a deeper reflection of the place where they are grown.

Biodiversity is foundational to Jo's farming philosophy. While the majority of his vineyards are dedicated to Melon de Bourgogne, seven hectares are planted to Folle Blanche, Pinot Noir, Chardonnay and the relatively unknown grape of Montils, all of which make up the blend for Atmosphères, Jo's crisp and cult-y sparkling wine. The diversity of soils and distinct terroirs form the identity of the Landron Muscadets: Amphibolite grown on plots underpinned by metamorphic rock, Les Houx from plots of sandstone on clay, and both Fief du Breil and Clos la Carizière from plots grown on orthogneiss and quartz.

His sparkling wine, Atmosphères is produced from young vines grown in sandy, rocky clay soils. Hand harvested and fermented in vat. Methode Champenoise techniques are used here with a dosage of 5g/l. Only 1000 cases produced. Crisp, dry, and aromatic. Very refreshing and pure fruit that brings the classic mineral qualities one would expect from this area to a sparkling wine that shows good finesse and length. Folle Blanche 36%, Pinot Noir 33%, Chardonnay 31%.