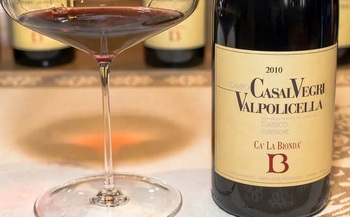 In many ways this is the signature wine of Ca la Bionda, it is a totally uncompromising Valpolicella made from the pick of the crop grown only in the Casal Vegri vineyard. Usually, in Valpolicella the best grapes are reserved for the Amarone and the second selection for the Ripasso wines. Not so at Bionda; this is a classic single vineyard wine with an unwavering commitment to the best interpretation of the vintage possible, the style varies, the DNA does not.

Casal Vegri is a single vineyard on an east-facing slope, harnessed by ancient terraces between 350 and 1200 feet above sea level, the soils are rocky, sparse clay on limestone. The vineyard is farmed organically and the vines are trained using a traditional pergola system, the family has great faith in this technique which is especially successful in very hot and very wet years. The only issue is that this is a system that requires exhaustive manual labor.

The grapes are picked by hand, usually in the last week of September, and then travel a short distance to the winery where they are destemmed for a temperature-controlled fermentation in steel tanks. Following fermentation, ninety percent of the wine is aged in botti (3000 litre barrels) and the balance in barrique, for eighteen months.  After blending it gets a further six months of bottle aging before release.

As a result, the wine is fresh, aromatic, and complex. It’s a ruby-garnet color, with a nose showing violet-tinged notes and red berries such as red cherry, raspberry, and cranberry. The palate is deliciously balanced, with silken-textured acidity and polished tannins. Pure sour cherry and forest fruits are delightful. Beautiful drinking when young, it will improve and can age for a decade.

While Casal Vegri is amazing when young, it will develop for a decade. It’s an excellent companion for roast meats while vegetarians should head for a mushroom risotto.