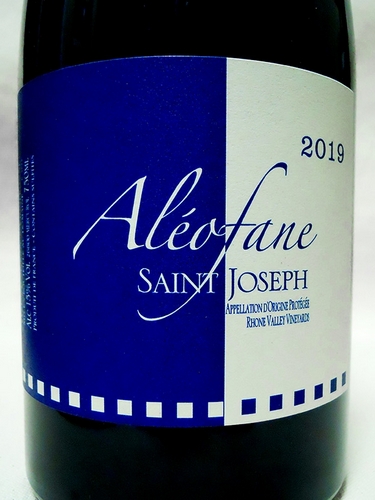 At a very young age, Natacha Chave knew that she would make wine, just like her parents.  At the beginning of 2000, her brother Yann Chave took over their father’s domaine (Bernard Chave) , a renowned vineyard created in 1970 on the Crozes-Hermitage and Hermitage appellations.  He renamed the Domaine ,and renamed it Yann Chave.

So, Natacha knew that of she wanted to make her own wine, she needed education, some land and a winery.  Natacha enrolled at the Suze la Rousse wine university in 2003, then passed a Farming Professional Capacity (CPA), and then did her work experience with various winegrowers to complete her training. In 2004, she bought 4 acres of vines in the Saint Joseph appellation at Tournon-sur-Rhône. In 2007, she bought a plot of 40 year old vines in Crozes-Hermitage appellation in the Chassis plain (Beaumont-Monteux village) and planted a few additional vines reaching extending her domaine to 16+ acres.

The name of the domaine is Aléofane, in reference with the imaginary island from a book by author, John Macmillan Brown. According to Natacha Chave, “Our immediate will is the respect of nature, soils, grapes and is to be as little as interventionist as possible both in grape growing and in winemaking process.” Grass covering between rows, total work of the soil according to the years to induce or not competition with the vine. And she goes on with vinification: indigenous yeasts and no enzymes. No filtration, no fining and as little sulfur as possible. Natacha also uses biodynamic preparations that favor the stimulation of the plant natural immunity and its balance. — Natacha’s approach is very time consuming, but the payoff is well worth it.

100% Syrah  During fermentation, the wine spent four weeks in tank. During this time, the juice was pumped over the skins, but the “pump-overs” were performed fractionally, in stages throughout the day. After the cap (the skins etc…that float to the top of the tank) was broken up, the solids were infused in the juice for an extra five days. The wine was put directly into barrel. A combination of 80% demi-muids (600 liter barrels), and 20% barriques (220 liter barrels). The wine was aged in barrel for 11 months before bottling. The wine was neither fined nor filtered.

Natasha’s Saint Joseph comes from grapes grown on granite soils and has a wonderful blackberry and plum fruit character. There are violet notes and sweet anise spice along with pepper and graphite notes. It is a complex and enchanting wine that develops over hours in the glass.