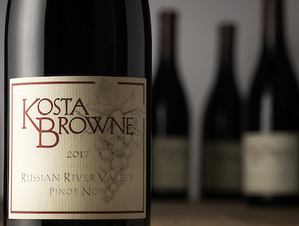 The Sonoma Coast  bottling is a blend of fruit from many vineyards (Pratt-Sexton, Marshall, Burnside, Watertrough, Kanzler, Gap's Crown, Thorn Ridge, Freestone) and almost as many clones (667, Pommard 4, 115, 777, 828, Swan, 23, 114, 2A) that were fermented in open top fermenters (mostly stainless, some concrete and 5% wood).

The wine was then aged in 40% new French oak barrels for 17 months before release.

96 points, Jeb Dunnuck:  The 2017 Pinot Noir Sonoma Coast reveals a ruby/purple, translucent color as well as a stunning perfume of black raspberries, cassis, crushed violets, spice box, sweet earth. It's rich, medium to full-bodied, has beautiful depth, a kiss of background oak, and a great finish. Mostly destemmed and aged 17 months in 40% new French oak, it's a brilliant wine to drink over the coming decade or more.

The wine was aged in  42% New French Oak for 15 months before release.